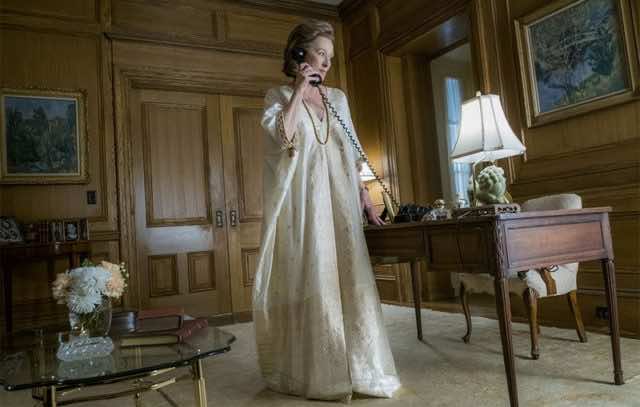 Marked by an ‘70s atmosphere, Steven Spielberg’s film “The Post” features an unexpected item which won the good opinion of critics:

Adorning a caftan, a 69-year-old regal-looking Streep appeared in a scene regarded by viewers as “pivotal.” She was dressed in an elegant “retirement gown”—an ivory-gold Caftan made of Indian silk fabric. Streep portrayed “Katharine Graham,” The Washington Post’s first female publisher.

“I got a text from an unknown person saying the caftan was the greatest thing they’d ever seen […] but caftans aren’t that unusual—they are everywhere,” she told The Hollywood Reporter.

Following the release of  “The Post” on January 12th, 2018, fans of the caftan design expressed their admiration on social media:

Meryl Streep’s magnificent caftan in The Post makes her look like the angel from Nancy Meyers’ christmas tree came to life to teach us a lesson about the first amendment pic.twitter.com/ELwtNMOU28

For real, where can I find that fab #MerylStreep ivory and gold #caftan from @ThePostMovie

“Caftan” (alternative spelling:“kaftan”) was originally worn by Ottoman sultans, but due to the Ottoman Empire’s strong global influence in the last few centuries, it has been adopted by different cultures throughout the world (for example, in northern and western Africa).

Caftan reached Morocco after its spread through Andalusia which first adopted it in the 9th century.

Morocco later refashioned and added its unique touch to the caftan, which is now known as “Moroccan Caftan.”

Today, caftans are embraced in the Arab world of fashion, and are mainly worn by women during events like weddings.