Rabat - The fourth edition of the Crans Montana Forum opened this Friday morning in Dakhla. The forum is traditionally a major moment when Morocco exposes the extent of its grand investments in its Sahara provinces, sells its Western Sahara position on to participants.

Rabat – The fourth edition of the Crans Montana Forum opened this Friday morning in Dakhla. The forum is traditionally a major moment when Morocco exposes the extent of its grand investments in its Sahara provinces, sells its Western Sahara position on to participants.

This year’s forum achieved an immense and almost unprecedented success this year, with nearly a hundred countries represented at the forum (49 African countries) and scores of businessmen and international experts.

Former French president Nicolas Sarkozy, who was a special guest at this year’s edition, seized the opportunity during an interview to laud Morocco’s recent efforts to revitalize its domestic politics, as well as its leadership position in Africa.

Hailing Morocco’s “progress and stability” in a traditionally “unstable region”, President Sarkozy described the north African country as “an African power” whose return to the African Union, “its intuitional family”, is “very important” for Africa and Morocco’s position in it. Morocco is “a major element” in the political and economic “survival” of the continent, a much-needed asset for the continent to face its numerous current challenges, he said.

“The return of Morocco to the African Union is very important for Morocco as it is a bridge between Africa and Europe, but it is also very important for Africa as it is a modern economy, and a stable and democratic country that comes back to the continent’s political scene,” Sarkozy said in an interview after the opening ceremony of the Crans Montana Forum.

The former French president went on to acknowledge the “political and economic transformations” that the Kingdom has witnessed in the last fifteen years.

“Who can deny the progress made in the last fifteen years despite crises and difficulties? Who can question Morocco’s stability?” Sarkozy asked, visibly paying tribute to the numerous political and economic openings that Morocco has been experiencing under King Mohammed’s guidance and unceasing plea for a “modern and accountable” civil service.

As for the future of Africa, of sustainable growth, and of South-South cooperation, which was a major theme at the Forum this year, Sarkozy made the case for a European “Marshal Plan” to help African governments in their respective bids to boost the continent’s growth and meet the never-ending challenges of a globalized word. “Our fates are sealed together,” Sarkozy concluded, understandably espousing a politically correct posture. 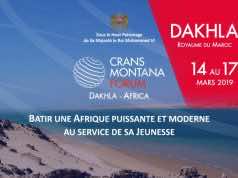 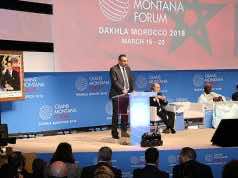