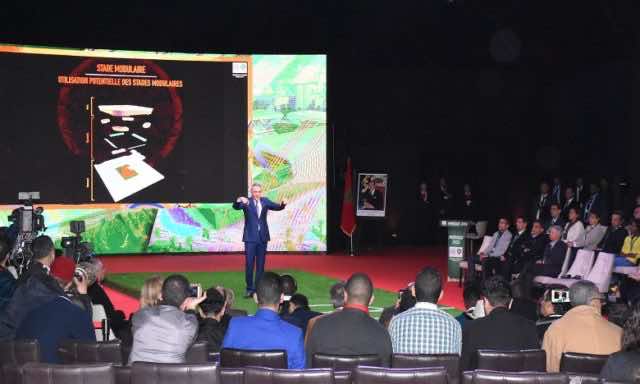 In a press conference held in Casablanca, the chairman of the committee, Moulay Hafid Elalamy, discussed the key aspects of the Moroccan bid, including Morocco’s proportional and lean campaign for the massive football tournament, the slogan (“Together for One Goal”) and the official Morocco 2026 website.

According to Elalamy, Morocco’s bid to host the FIFA World Cup is entirely in line with the economic and social development strategy established by the country under the leadership of King Mohammed VI.

Elalamy, who is also the Minister of Trade and Industry, emphasized the notable work done by all the contributors and national partners to prepare a comprehensive and complete dossier to meet FIFA’s requirements.

The official also introduced the cities that will be hosting World Cup matches if Morocco’s bid is selected over the competing North American joint bid from the United States, Canada and Mexico. Elalamy has also promised a remarkable World Cup to celebrate the best of football. The World Cup in Morocco, according to the committee chairman will be beneficial for soccer supporters, FIFA, Morocco, the world and Africa.

So much to be done?

In order to host the World Cup, Morocco needs to build more stadiums that will meet FIFA standards. Moroccan bid planners are determined to create a budget of USD 3 billion exclusively for stadium building and to refurbish the five already existing stadiums. The country is planning to build nine new stadiums as well as training facilities. Another USD 3 billion will be devoted to accommodations, which will include the addition of more than 30,000 rooms to receive football fans, national delegations and the 48 participating World Cup teams.

According to the sports news outlet ESPN, one of the new stadiums being planned will be a 93,000-seat home for the national soccer team in Casablanca. The facility would also host the opening and final games during the 2026 World Cup.

Stadiums of about 46,000-seat capacity will be also built in Oujda and Tetouan, according to the bid committee. Other new stadiums of similar capacity are planned for Casablanca, Marrakech, El Jadida, Meknes, Nador and Ouarzazate.

On Saturday, the organizers wrote on their official Twitter account that “Morocco 2026’s six ‘Legacy Modular Stadiums’ are specifically designed to be downscaled after the tournament to provide a meaningful, lasting legacy for both Morocco and Africa.”

#Morocco2026‘s six ‘Legacy Modular Stadiums’ are specifically designed to be downscaled after the tournament to provide a meaningful, lasting legacy for both Morocco ?? and Africa ?#FootballForAll #TogetherForOneGoal pic.twitter.com/G2t5Z0GVnL

The decision as to where to locate stadiums was done with transportation and infrastructure considerations as key priorities. The committee selected the cities, all of which are located less than 550 kilometers from Casablanca. All are conveniently connected in terms of road, rail and air transport. This important factor will provide optimal transport conditions for players and fans.

The committee also revealed the designs of the stadiums to be built for the World Cup.

Elalamy underscored the benefits and the significant socio-economic impacts of organizing the World Cup in Morocco. The tournament, according to the Moroccan official, will serve as a catalyst for further development and will reinforce a dynamic of social and economic progress for both Morocco and Africa.

How the World Cup is Important for Morocco?

According to FIFA, important criteria include “the sustainable benefits generated for the host member association and country well before, during and long after the event.”For Morocco, the benefits of bidding or hosting the massive tournament are significant. According to FIFA, the tournament can serve as a catalyst for new and improved facilities to support the development of the game at all levels, it can also enhance higher quality football development programs.

The tournament can also provide the host country with greater commercial and investment activities and increase cooperation with international bodies and the government. “While winning a bid is the ultimate goal, the bidding process can also have real value in its own right,” FIFA added.

Morocco is a Football Planet

In an interview given to the British news outlet The Guardian before Morocco’s 2018 World Cup qualifier win against Ivory Coast, Mustapha Hadji, the former international footballer, spoke about Morocco’s passion for football.

Hadji, who is also the Moroccan national football team’s assistant coach, said that “After Islam, football is our second religion,” adding that the nation is a “real football country.”

“Football is magic. it can do things that no other sport can,” Hadji told The Guardian. “It can make you cry in one second and make you feel in love the next. Politics cannot do that.”

Morocco submitted its bid book to FIFA on Thursday. After the submission, the bid committee said that the country will present a “record with undeniable qualities and proposes to organize a successful, responsible and profitable World Cup with an important legacy for the country, the continent” and for the world.