Rabat – Hundreds of thousands of protesters lined the streets of the United States’ capital for the “March For Our Lives,” calling for stricter gun control in America. The march was put together in the five intervening weeks since the mass shooting at Marjory Stoneman Douglas High School in Parkland, Florida that resulted in 17 students’ deaths.

The march follows in the tradition of peaceful civil protest on the streets of Washington D.C., harkening back to 1960s activism of the US Civil Rights Movement. However, at Saturday’s “March For Our Lives,” the majority of speakers were under the age of 18. As student activist and Parkland survivor Emma González said before leaving the podium: “Fight for your lives before it’s somebody else’s job.”

“March For Our Lives” highlighted the issue of gun violence across the country: survivors of the Florida shooting shared their spotlight with speakers from high schools in Los Angeles and Chicago.

The campaign to tackle gun violence aims to build momentum and pressure lawmakers by demanding expanded background checks on gun buyers, a ban on assault weapons, and raising the minimum age of gun-buyers.

Cameron Kasky, a Parkland survivor, told those gathered in Washington D.C. that “the march is not the climax of this movement–it is the beginning.”

“Today, we take to the streets in over 800 marches around the globe and demand common sense gun laws.”

Yolanda Renee King, 9, drew thunderous applause as she echoed the words of her grandfather, Dr. Martin Luther King Jr.: “I have a dream that enough is enough. And that this should be a gun-free world, period.”

However, despite one the groundswell of popular support for gun reform inspired by the Parkland survivors, substantive gun reform may yet be far off. Few issues in American politics are more polarizing than that of gun ownership, and many Americans reject any efforts by the government to restrict firearms for law-abiding citizens.

The gun lobby in the United States offers staunch support for citizens’ rights to own firearms and hotly contests any moves in government to curtail them. The National Rifle Association (NRA) often cites a single, 27-word sentence from the US constitution, penned in 1791, guaranteeing Americans’ rights to form civil militias.

US President Donald Trump, known for his outspoken commentary on Twitter, was silent on the issue of the rallies on the streets of the capital. However, the White House released a statement saying, “We applaud the many courageous young Americans exercising their first amendment rights today. Keeping our children safe is a top priority of the president’s.” 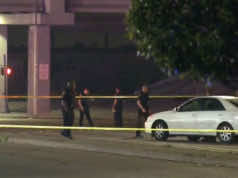