Rabat- Tens of thousands of protesters flocked to the street, in several parts of Spain including Barcelona and Lerida, following the arrest of former Catalan president Carles Puigdemont in Germany on Sunday. 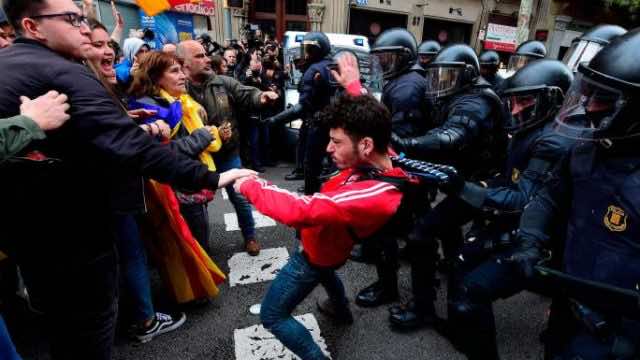 Rabat- Tens of thousands of protesters flocked to the street, in several parts of Spain including Barcelona and Lerida, following the arrest of former Catalan president Carles Puigdemont in Germany on Sunday.

Puigdemont’s lawyer, Jaume Alonso-Cuevillas, said in a post on Twitter that the exiled official, Puigdemont, had been intending to return by vehicle to Belgium, where he has resided since fleeing Spain last October. He was then detained by the German police based on an international arrest warrant.

“President Carles Puigdemont was held in Germany when he crossed the border from Denmark, on his way to Belgium from Finland,” the lawyer said.

Local media reported that at least 89 people were injured and several demonstrators were arrested as they clashed with police for the first few hours after the news of Puigdemont’s arrest broke.

Several videos have circulated, showing Spanish police firing shots into the air and speeding vans towards protesters in an attempt to disperse crowds.

Demonstrators, who chanted “This Europe is shameful,” also gathered in front of the European Commission’s Barcelona offices to demand the release of the former President Puigdemont.

The ousted leader has been living in self-imposed exile in Belgium since fleeing Spain after a failed bid by his regional government to declare Catalonia’s independence from the country in late October 2017.

The Spanish government-led declaration to impose direct rule over Catalonia included the Spanish court’s dissolution and dismissal of the Catalonian parliament and called for a new regional election in December.

Puigdemont had fled to Belgium along with other members of his dissolved cabinet after Spain’s attorney-general filed charges of rebellion, sedition, and misuse of public funds against Puigdemont and five of his ministers on October 30.

The arrest came after a Spanish Supreme Court judge, Pablo Llarena, ruled on Friday to reactivate the international arrest warrants against Puigdemont. The judge also ordered five other Catalan officials to be detained without bail.