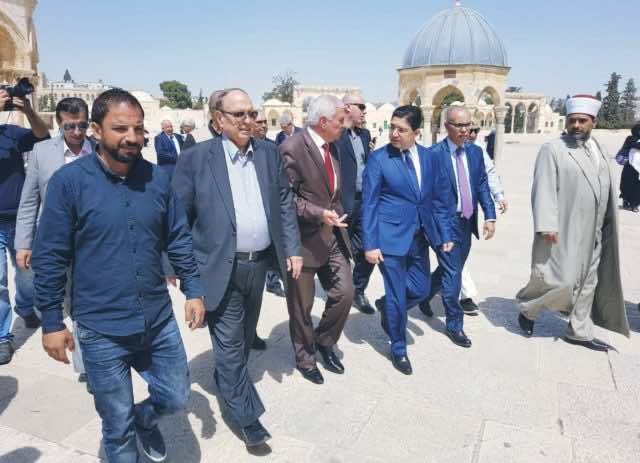 The minister’s visit is part of a working visit to Palestine at the invitation of the Palestinian leader, Mahmoud Abbas.

Bourita said in a press statement reported by Reuters that “the prayer at the Al-Aqsa Mosque is a strong message of support for the Palestinian cause,” adding that his visit “comes under the high instructions from King Mohammed VI.”

Al-Aqsa is the third holiest site in Islam, located in the old city of Jerusalem.

Nasser Bourita was accompanied during his prayer by the Palestinian Ambassador to Rabat Jamal Choubki, the Palestinian minister of Jerusalem affairs, Adnane El Houssaini, and Sheikh Omar El Kassaouani, director of the Al-Aqsa Mosque.

During his visit to Palestine, Bourita will hold meetings with President Abbas and other members of the Palestinian cabinet for talks on a wide range of topics, including the Palestinian statehood.

Bourita’s visit will take place just a few months after President Donald Trump’s decision to recognize Jerusalem as the capital city of Israel and to relocate the US embassy to the holy city from its current site in Tel Aviv.

Trump’s decision was uniformly condemned by regional Arab and Western countries alike. World leaders, including King Mohammed VI, denounced the US decision, considering it a significant threat to further peace negotiations between Palestine and Israel.