Rabat - There is a reason that success stories are among the most compelling human stories: they humanize life and remind us of the essential truth that it is possible to beat the odds, to rise above one’s socio-economic condition. In a way, success stories that are truly compelling are also truly humane because they’re a constant reminder that we can, by way of perseverance, be "the heroes of our stories." Such is Rachid Khadiri Abdelmoula’s incredible success story. 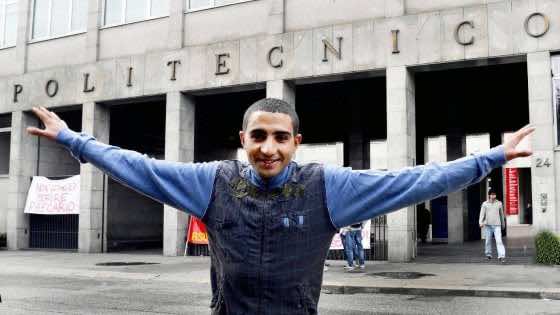 Rabat – There is a reason that success stories are among the most compelling human stories: they humanize life and remind us of the essential truth that it is possible to beat the odds, to rise above one’s socio-economic condition. In a way, success stories that are truly compelling are also truly humane because they’re a constant reminder that we can, by way of perseverance, be “the heroes of our stories.” Such is Rachid Khadiri Abdelmoula’s incredible success story.

Earlier this week, the Moroccan’ determination and unflinching professional devotion brought him the highest accolade of the academic world: a PhD. Rachid was enrolled at the Polytechnic University of Turin, where he started off as a street vendor financing his studies with his meager income.

And because receiving a PhD in Civil engineering is the result of years of dedication and hard work, Rachid’s story has made the rounds in the Italian press.

Even Italian political parties and associations known for their vehement opposition to immigrants and their fascist rhetoric have publicly praised the Moroccan’s efforts, hailing him as “a symbol of integration.”

Born in 1987, Rachid left his native Morocco in 1998 to join two of his older brothers in Turin, Italy. There, he told his brothers that his objective is to start working as soon as possible to send remittances to his parents back home. But his brothers convinced him to pursue his studies, persuading him that good and deservedly earned certificates would increase his chances of climbing the “restrictive” social ladder in Italy.

Rachid took heed of his brothers’ counsel, but he nonetheless decided to combine school and work. As a vendor of lighters, napkins, newspapers, and other little gadgets in the streets of Turin, the Moroccan toured a city he now declares to know like the back of his hand. He used his street vendor’s income to “survive and finance my studies at the Polytechnic University of Turin,” one of Italy’s leading institutions.

Every day after school, Rachid told Republica, he would take on his ‘street vendor identity’, touring the streets of Turing and selling his collection of handy little gadgets.

“It has been a strenuous journey,” he told the outlet, especially recalling memories of the days when he would “spend an entire day walking through the streets of Turin without even making €10.” Once at home at nights, despite the fatigue of meandering through Turin’s streets, “I had to study… I was really afraid I would fail that year,” he explained, remembering the ghosts of his first year at university. He also mentioned the “racist attacks” and “daily struggles” he survived before meeting some “good friends” on whom he could sometimes count to fill the gap.

For his PhD thesis, Rachid spent eight months in Switzerland at a CEMEX, a global leader in the ‘building materials’ market. “It was an experimental immersion in the company’s work,” Rachid later said of the Swiss episode of his academic training, adding: “It was a marvelous experience. I worked and collaborated with 24 different nationalities.”

Many on social media have shared videos of the best moments of Rachid’s PhD ceremony. A user commented on Facebook: “In these times of fear and suspicion, when populist and anti-immigration rhetoric is gaining considerable ground, and when the media only underscore criminal deeds by some specific communities, stories like his need to be shared and acknowledged.”

Once a street vendor bereft of the most basic necessities, Rachid has become, as they say in Italian academia, a “Maestro.”

Applauding and celebrating Rachid’s implausible and dared success, some social media users also commented that they “hope that stories like this will set an example for many youth in Morocco.”