Rabat -  Minister of Foreign Affairs and International Cooperation, Nasser Bourita, described as "serious developments" the multiple provocations of the Polisario elements in the areas of Guerguerat, Bir Lahlou, Tifariti and Lamhaybes, located in the buffer zone between. 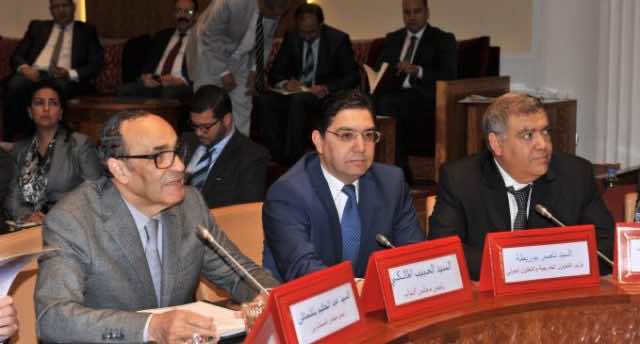 Rabat –  Minister of Foreign Affairs and International Cooperation, Nasser Bourita, described as “serious developments” the multiple provocations of the Polisario elements in the areas of Guerguerat, Bir Lahlou, Tifariti and Lamhaybes, located in the buffer zone between.

Morocco will not allow any change in the legal and historical status of the Guerguarat buffer zone, which is an integral part of the national territory, said, Sunday in Rabat minister of Foreign Affairs and International Cooperation, Nasser Bourita.

“The UN’s reaction to Polisario provocations in the Guerguerat region was not strong enough to deter the separatists,” Bourita told the press after the joint meeting of the Committee of Foreign Affairs, National Defense, Islamic Affairs and Moroccans living abroad at the House of Representatives and the Committee of Foreign Affairs, Borders, National Defense and Occupied Zones at the House of Advisers, which was held in the presence of the minister of the Interior and the minister for Relations with the Parliament and Civil Society, government spokesman, to review the latest developments on the issue of the Kingdom’s territorial integrity.

Bourita stressed that the Kingdom “will act firmly against the provocations of the Polisario in the Guerguerat region and will not allow any change in the status of this area which is an integral part of the national territory and has always known a Moroccan presence until 1991.”

Morocco withdrew from this area for the sole purpose of allowing the UN to manage the ceasefire, said the minister, noting that the United Nations and the major powers must assume their responsibility and that the Kingdom reserves the right to defend this part of its national territory.

The minister also added that today’s meeting, which was held at the initiative of the government, is intended to inform members of both Houses of parliament of the dangerous developments in the buffer zone, located at east of the defensive device of the Kingdom.

Bourita also warned that the separatist group has gone even further in its provocations by committing certain dangerous acts in the region of Tifariti and Bir Lahlou, which aim to change the legal and historical status of this zone.

Morocco considers such actions unacceptable and will undertake diplomatic actions that are not in any way part of a process of appeasement or the ordinary management of the situation, but to draw attention to the dangerous nature of these actions that constitute a violation of the ceasefire, threaten regional stability and risk plunging the region into the unknown, he said.

A member of the parliament who attended the joint meeting of the Moroccan parliament told Morocco World News that Morocco’s Interior Minister, Abdelouafi Laftit, said that the Polisario had moved its “Ministry of Defense” and its “parliament” to the area of Bir Lahlou in the buffer zone. The Moroccan official added that other elements of the Polisario set up tents he area of Al Mahbas, located near the Moroccan defense wall.