Rabat - As Morocco and Argentina pledged to reinforce their bilateral ties, the South American country expressed its interest in entering into a free trade agreement with Morocco to strengthen trade relations between the two countries.

By
Safaa Kasraoui
-
Apr 1, 2018
Spread the love
Rabat – As Morocco and Argentina pledged to reinforce their bilateral ties, the South American country expressed its interest in entering into a free trade agreement with Morocco to strengthen trade relations between the two countries.
In a statement to Maghreb Arab Press (MAP), Argentina’s Foreign Affairs Minister Jorge Faurie noted Morocco’s significant potential in the fisheries sector, emphasizing the need to strengthen bilateral cooperation in the sector.

Faurie, who arrived in Morocco on Friday, also stressed the need to reinforce bilateral ties between the two nations in agriculture, an area to which Argentina attaches special interest, according to MAP.

Faurie also expressed his interest in exchanging best practices between the two countries in the usage, management and distribution of water resources, as well as agriculture-related energy practices.

The official made his remarks following a meeting with Morocco’s Secretary of State for Fisheries, Mbarka Bouaida. The Moroccan official said the two countries maintain very good relations on both a political and economic level.

Bouaida also discussed the importance of strengthening economic cooperation, emphasizing that the partnership between Morocco and Argentina can serve as a foundation for the further development of economic ties between Africa and South America.

The two parties also set a work agenda and agreed on the essential points of the partnership between the two countries.

Earlier this week, Argentina’s Ministry of Foreign Affairs told MAP that Faure’s visit “will be a step towards solidifying political bilateral relations and boosting technical and scientific cooperation among other spheres between Morocco and Argentina.”

Argentina’s exports to Morocco were valued at USD 509 million in 2017, marking an increase of 38 percent over the course of the past two years, added the same source. 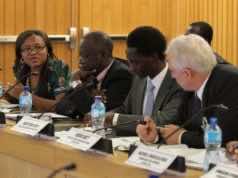