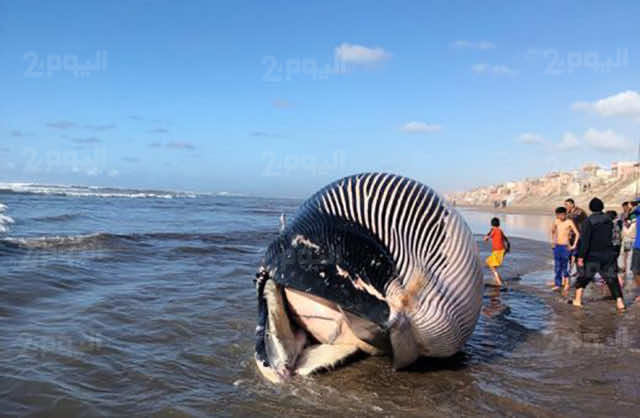 A video shared by Akhbar Al Yaoum on Monday shows men and women gathered around the huge whale carcass, while children took the chance to climb on top of it and play.

The whale was over 20 meters in length (around 65 feet), and professionals identified the mammal as a blue whale belonging to the baleen whale species, whose weight can reach 140,000 kilograms.

The same source indicated that the whale might have beached or could have been accidentally hit and killed by a ship cruising the ocean, before the current carried it on to shoreline.

Throughout history, cetacean stranding, or beaching, has been a common phenomenon in different seashores around the world, when whales and dolphins and other aquatic mammals accidentally strand themselves on land and typically die of dehydration.

Definitive reasons behind cetacean stranding have not yet been identified, though  the behavior could stem from natural causes or from human-related factors, according to the International Whaling Commission.

Morocco’s Ministry of Maritime Fisheries and the Association of Integrated Resource Management (AGIR) previously announced their collaboration to protect cetaceans from “accidental fishing” by fishermen who capture the species by mistake in lieu of their intended market fish. 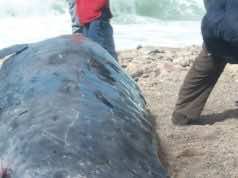