Rabat- To condemn Polisario’s actions in the east of Morocco’s defense wall, members of political parties and cabinet officials signed the Laayoune Declaration on Monday, April 9, as part of their meeting in the southern city Laayoune, at the request of Head of Government Saad Eddine El Othmani. 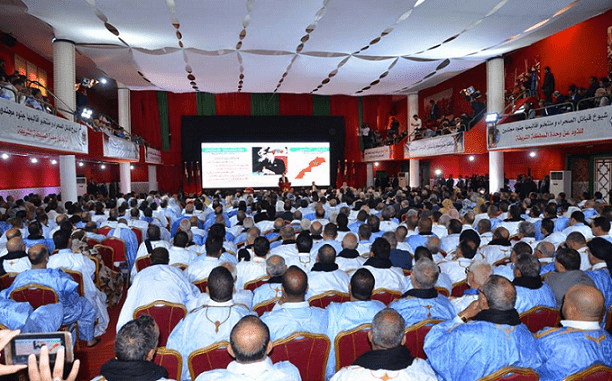 Rabat- To condemn Polisario’s actions in the east of Morocco’s defense wall, members of political parties and cabinet officials signed the Laayoune Declaration on Monday, April 9, as part of their meeting in the southern city Laayoune, at the request of Head of Government Saad Eddine El Othmani.

Laayoune hosted demonstrations on Sunday and Monday, bringing together leaders of political parties, MPs, elected officials, Cheikhs (tribal leaders), dignitaries and Sahrawi leader-activists, with the aim of showing their mobilization behind the government and their resolve to defend their country’s territorial integrity.

In the Laayoune Declaration, the signatories laud the leadership and the policies led by King Mohammed VI in defense of Morocco’s territorial integrity and inalienable rights at all levels. In addition, the declaration highlights the plans for sustainable economic development and regionalization that will benefit the provinces.

The signatories also commend international support for Morocco’s Autonomy Plan and call on the UN and the international community to act in response to Polisario provocation, in order to maintain security and stability in the region.

Here follows the full text of the Declaration of Laayoune:

“Reflecting the firm, lasting and renewed national consensus of all the components of the Moroccan people, the various political bodies, the representative institutions and the forces of society in the defense of the unity of our homeland and its territorial integrity and in countering any and all machinations aimed at harming the sovereignty on any part of our country from Tangier to Lagouira;

Taking into consideration the great concerns at the sovereignty, political and popular level regarding the developments of the question of the Moroccan Sahara, especially the actions of the separatist front that must be confronted with the required determination, firmness and vigilance with regard to the areas of our country located east and south of the security wall in the so-called ‘buffer zones,’ which our country has voluntarily, and in a sovereign decision, placed under MINURSO control in response to the international community’s desire under the 1991 Ceasefire Agreement, to remain empty in order to avoid direct contact with Algeria;

Based on the national responsibility in defending our national unity and territorial integrity as one of the firm constants that unite the Moroccan people; and being aware of our historical and political responsibility during these delicate circumstances that require concerted efforts, unified ranks and uniting around the supreme interest of the country, we, the political parties of our country, are happy to meet here in the steadfast and emerging city of Laayoune in this national mobilisation meeting, which includes many of our leaders, high-ranking members, and MPs and territorial collectivities’ elected officials, and all other organizational bodies and activists in the Kingdom’s provinces and regions, especially the region of Laayoune-Sakia-Lhamra and Dakhla-Oued-Eddahab;

In full awareness and unwavering determination, the leaders of parties, the parliamentarians, the elected officials, the elders, the dignitaries and the many leader activists from the Sahara, addressing the national, regional, continental and international public opinion, they:

1. Condemn and reject the machinations and actions carried out by the enemies of our territorial integrity at all levels, especially the recent acts of hostility by the Polisario aiming to create a new reality through attempting to transfer some of their civilian and military elements from Lahmada, in Algeria — and with the encouragement of this latter — to the buffer zones, in flagrant violation of the cease-fire agreement and in total ignorance of the will of the United Nations and Security Council resolutions;

2. Commend the leadership steps and the wise policies led by His Majesty the King, may God glorify Him, in defense of our inalienable rights at all levels, praise the tenor of His Majesty’s message to the Secretary-General of the United Nations on the latest developments in the region and note with pride the successes of His Majesty the King at the continental and international levels, in such a way that strengthens the position of our country in the continent and worldwide and protect its territorial integrity.

3. Commend the national consensus in the face of these provocations, a consensus that translates the awareness and vigilance of the Moroccan people against the maneuvers of the enemies, and that affirm that we are all determined to confront any machinations aimed to change the current and historical situation of these regions;

4. Draw the attention of the United Nations to the necessity to avoid complacency towards these provocative actions, and to deal with them in accordance with the responsibility of maintaining security and stability — which we share with the UN the keenness to ensure in our region — and call on MINURSO, and through it the international community, to take firm, resolute and deterrent measures to force the Polisario to withdraw from these areas and to remove all manifestations of their attempts to create a new reality in the region;

5. Reaffirm attachment to the peaceful, political and lasting solution agreed upon under the auspices of the United Nations being the sole framework to seek a solution that guarantees the protection of the rights of our country and the maintenance of peace in our region;

6. Considering that the only option to end this artificial conflict lies in the autonomy plan under Moroccan sovereignty proposed by the Kingdom as a framework for negotiation, which the international community has described as serious and credible, and which continues to receive the support of a growing number of countries;

8. Commending the patriotic feelings and loyalty towards the allegiance ties and the Alaoui Throne as well as to His Majesty the King, may God glorify Him, shown by the populations of these provinces, their elders and tribes. Also commending their positive and efficient contribution to the political, democratic, and development processes under way, in our country. Thanks to this dynamic, these provinces have become an essential pillar in edifying this new and modern Morocco, through their endeavours within the territorial communes, parliament, and different chambers. According to the Minurso census they constitute the majority of the populations of the Sakiat Al Hamra and Oued Dahab provinces. They indeed and realistically are the true representatives of the will of the citizens in these provinces. A will they have expressed many times in elections the transparency of which has been attested to nationally and internationally. To be commended as well the positive role played by the civil and human rights societies, in these regions, in social development, and the defense of the territorial integrity nationally and internationally.

9. Expressing pride towards the multidimensional progress in these provinces that will embark on an even more sustainable such dynamic thanks to the development model initiated by His Majesty the King, may God glorify Him. These provinces will thus become an economic hub that will serve as a pioneering model of integrated development in this part of the kingdom, through a more sustainable use of its natural resources. The local populations will be the main beneficiary of such a dynamic in a context of confidence in the future.

10. The necessity to put the southern provinces at the forefront of the advanced regionalization and to hasten this process with the aim of achieving autonomy of these provinces.

11. The necessity to consolidate the official diplomacy and the popular one led by political parties, parliament, trade unions, NGOs, and the business community in order to strengthen coordination and diversify the communication channels with different counterparts, and influential decision makers, notably in Europe, the United States, Asia and Africa.

12. Renew commitment to bank on our parties relations with different counterparts in brotherly and friendly countries with the aim to set up influential groups supporting our countries interests and thwarting adversarial theses.

13. Condemning yet again the Algerian regime’s hand behind this artificial issue and its continuation while mobilizing all its resources to harm our country regionally, in the African continent and internationally. We regret the Algerian regime’s lack of positive response to our country’s call, expressed by His Majesty the King and the political parties, to clear the atmosphere between our two countries in the best interests of our two peoples. We thus invite anew our brothers in Algeria to depart from yesterday’s conundrums and reminisce the otherwise shining moments of our common fight away from the Cold war aftermath that has borne this artificial conflict in our region. Its repercussions thwart the edification of the Maghreb Arab as much as it hinders progress and cooperation between our two brotherly countries.

14. Strengthening the internal front in terms of democracy, development and socially by encouraging the endeavours of all parties and components of our society to pursue the mobilization and vigilance in order to uncover all maneuvers hatched by our country’s enemies.

15. Setting a political front to defend our territorial integrity that has been and always will be a point of unanimous popular consensus and mobilization out of loyalty to the history and in deference to the martyrs, as well as to the eternal Al Massira sermon. The challenges and misdeeds of the enemies will only strengthen our resolve.”