Rabat- To paraphrase the great George Orwell, some miracles are more miraculous than others. Such was Roma’s theatrical display against the Messi-led and Valverde-coached boys from Barcelona. 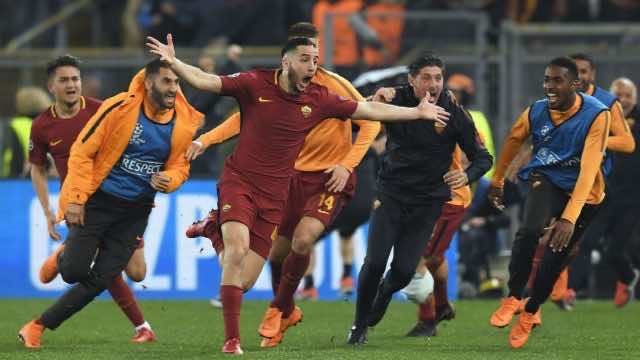 Rabat- To paraphrase the great George Orwell, some miracles are more miraculous than others. Such was Roma’s theatrical display against the Messi-led and Valverde-coached boys from Barcelona.

But where to begin with a game that witnessed the humiliation of a coach and a squad I’ve been lauding as unbeatable for the past few months?

One thing is certain: Roma’s comeback is a footballistic earthquake, and one that can be ascribed to Valverde’s tactical mishaps.

When I watched the game, there was an overwhelming sense that Barça was not Barça, that the whole game was some huge set up, perhaps the biggest April Fools’ joke?

“Is this Barcelona?” fans around me kept asking themselves as the giant Catalans were laughably ineffective in what will surely be remembered as their most mediocre performance in a defining Champions League tie.

No wonder, then, that the Stadio Olimpico fans were as enthused as Messi and Iniesta were dejected. Yes, encouraged by the mad and enraptured crowd that came to support their city’s gladiators, Roma’s squad looked like Jesus walking on water, in dogged defiance of all the laws of physics.

In a purely biblical sense, then, Roma’s unthinkable comeback is perhaps modern football’s closest rendition of the Gospel’s Resurrection: faith, when true and sustained, can move mountains and overpower, like Joshua in Jericho, the most impenetrable forces.

As their coach tirelessly warned in the scores of previous press conferences, Roma kicked off as they had expected: An early first goal to shatter the confidence of Barcelona, to force Valverde into conceding the unlikeliest tactical blunders.

Dzeko’s goal, like that of Camp Nou, saw a low-range ball  make it through Barcelona’s staunch defense before bringing the first goal home.

With that early first goal, Dzeko gave Roma some room for hope; Italian fans, thrilled as ever, kept pushing their team to overpower Barcelona, in all senses of the word.

No crosses from Semedo or Jordi Alba, no tantalizing display of passing accuracy, no moments of godlike skills and divine inspiration with which Messi alone can stun his opponents: for the whole first half, Barcelona looked more like a mid-table team than the unstoppable leader of what is arguably Europe’s most intense league.

To top it all off, the midfield–the typical bastion of Barcelona’s hitherto unchallenged supremacy–resembled a Roma-dominated playground, with Iniesta and Rakitic moving with raw zeal of kids playing in the street.

And so, when the French referee called for the end of the first half, the footballing world started thinking what no one but Roma’s coach had dared to believe before the game kicked off: this Roma may–indeed can–make history tonight.

And make history they did!

“We’ll play our strongest line-up giants Barcelona. We must play with passion, heart and belief right up until the final whistle if we want to do the unthinkable. We have the duty to give it everything,” Roma’s coach Eusebio Di Francesco said in the press conference before the match.

Di Francesco’s men took heed of his words: as the second half kicked off, determination and belief propelled Roma forward, allowing them to outmuscle Barcelona in all possible ways. Having stifled and overwhelmed Iniesta and Co. in the midfield, the inspiring Strootman – De Rossi – Nainggolan trio gained momentum, forcing Barcelona to surrender and concede another goal. And yet, for all the bravery and unbelievable consistency that Roma showed, Ter Stegen—what a goalkeeper he is!—kept delaying the Italian momentum.

Barcelona was outnumbered, bullied; in a sense, there was a feeling that the two teams had flipped: scaring opponents into stupid and intolerable blunders is a trick that Roma took right out of Barcelona’s playbook.

So when Dzeko, again, made his way through Pique and Umtitti, the Spaniard knew that the only way to deny the Bosnian a second goal was to foul the Roma forward.

At which point, the referee decided that there was a penalty—and there clearly was one. The Stadio Olimpico erupted in chants and slogans, practically transforming into Capua.

With a score line of 2-0, Roma was boosted, emboldened, and invigorated. What seemed far-fetched and improbable was now within inches of attainability: Barça was no longer unstoppable. So Roma kept pushing, wilder and more boisterous than before.

Meanwhile, Barcelona looked like a beleaguered army that had given up on the idea of launching an offensive. And, like many other teams humiliated in the past ten years, they resorted to defense, praying the gods of the game would be sympathetic to them by preventing Roma from scoring the winning goal.

But Barcelona should have known better: the gods, in their irreproachable fairness, are more often than not on the side of those who, singularly focused on their desired outcome, give it their utmost.

Iniesta’s facial expression said it all when Kostas Manolas scored his defining header at the 83rd minute. By then, it was clear that Barcelona could do little to score a goal to change the whole night. Messi was unusually uninspiring with the ball; Suarez was lackadaisical, flippant, and unbelievably unreliable. In conceding that third goal, Barça bid farewell to its very triumphant recent past; ahead, lies the painful memory of a wasted opportunity.

For Messi and Co., yesterday signaled, as clichéd as that may sound, the beginning of the end of an era. “It is really tough. It seems untrue,” Iniesta said afterwards, adding that it is almost unacceptable to be defeated in a season and at a moment when everyone thought they were at their best.

Barça, like countless giants before, fell when no one could even conceive that they could be beaten, much less humiliated by one of the “underdogs” of the tournament.

For Roma and many others, it is a night to remember, to recall the beauty of one of the most extraordinary comebacks in the history of the competition. “This win is one of the best I have ever experienced since joining Roma,” De Rossi said, hailing Roma’s coach as the one who believed and helped the squad make the difference that was needed to propel the Italians in their first semi-finals in decades.

“It wasn’t luck,” said coach Di Francesco, pointing out that his side has the depth and talent needed to play the final in Kiev, their season’s goal.

Roma topped a group that consisted of Chelsea and Atletico Madrid. They have just humiliated one of Europe’s greatest teams. They have an impressive goalkeeper in Alison. Can anyone dare say that they’re still an underdog?