Rabat - Hatim Ammor seems to be the national team’s number one fan. 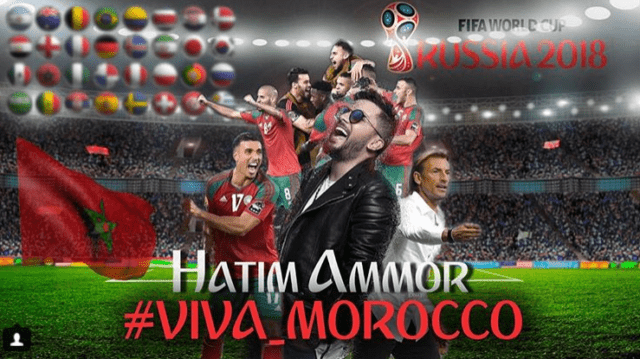 Rabat – Hatim Ammor seems to be the national team’s number one fan.

The Moroccan singer is set to release a song called “Viva Morocco” to support the Atlas Lions for the summer 2018 World Cup.

On his Instagram page, Ammor teased fans with a picture of him surrounded by Hervé Renard and a couple of the national team’s players, suggesting an imminent new single. “Soon,” he wrote, adding the hashtag #viva_morocco to his caption.

It didn’t take long for the national team and their coach to react to this upcoming tribute. Mehdi Benatia posted a video of him and his teammates having great time while listening to a bit of the song.

As for the French coach, he took to his Twitter account to thank the singer. “Thanks to @AmmorHatim for his song to #morocco #nationalteam #football,” he wrote in
Darija, French, and English.

Hatim Ammor isn’t the only one who is showing his support through music. Moroccan diva Samira Said and rap sensation Douzi both their respective anthems “Colors” and “Let’s Go Morocco,” to honor the Atlas Lions.

The Moroccan team will need all of the support it can get. The Lions will battle the Ukrainian, Estonian, and Slovakian teams in three additional pre-World Cup friendly games only one week before the kickoff for the 2018 World Cup in Russia, according to the Royal Football Federation (FRMF).

When the tournament begins on June 14, the Atlas Lions will first battle Iran on June 15. The team will face Portugal in their second game on June 20, and wrap up the first round of the tournament against Spain on June 25.

Thanks to @AmmorHatim for his song to #morocco #nationalteam #football ???? pic.twitter.com/Gzq6gT1Sj8