Rabat- Saudi Arabia sports authorities ordered the shutdown of a women's fitness center in Riyadh on Friday, over a promotional workout video deemed contentious for showing a woman in a tight-fitting sportswear, while kicking a punching bag. 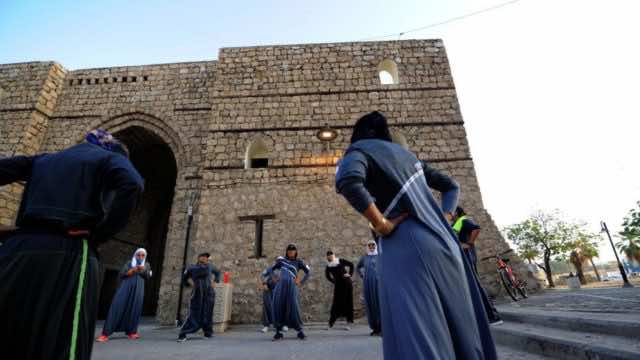 Rabat- Saudi Arabia sports authorities ordered the shutdown of a women’s fitness center in Riyadh on Friday, over a promotional workout video deemed contentious for showing a woman in a tight-fitting sportswear, while kicking a punching bag.

The President of the General Sports Authority, Turki al-Sheikh, who ordered the suspension of the center’s license and the opening of an investigation, said the video contained scenes that could corrupt public morals, adding in a Twitter post that Saudi authorities “will not tolerate this.”

As for the communications advisor at the royal palace, Saud al-Qahtani, he welcomed the sports authority’s swift response, saying on Twitter that the Arabian kingdom was on the path to “moderation without moral breakdown.”

Since 2009, all-women fitness clubs that are not under the supervision of a government hospital or clinic, were closed down after leading Saudi Arabia’s clerics have condemned the gyms and clubs for “shamelessness.” They claimed that women would be tempted to leave their homes and neglect their husbands and children.

The decision to close down all-female wellness centres, led a group of Saudi women to launch during the same year, a campaign called “Let Her Get Fat,” blaming the authorities for the lack of places to exercise outside the home since they cannot use men’s clubs.

Amid the vast program of reform that has been spurred by Crown Prince Mohammed Bin Salman, sports authorities started granting licences for women’s gyms to encourage Saudi women to embrace healthier lifestyles.

However, licenses are only approved for gyms that focus on fitness and weight-loss activities, such as running, swimming and weightlifting. Centers that offer “competitive sports,” such as volleyball, basketball and football, will not be granted licences.