Rabat- A horse pulling a carriage was reportedly injured after ramming into a car near the Majorelle Garden in Marrakech on Tuesday. 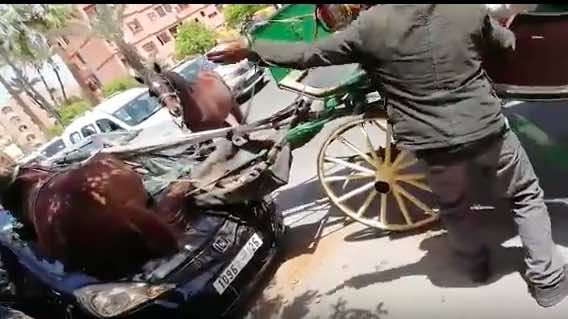 Rabat- A horse pulling a carriage was reportedly injured after ramming into a car near the Majorelle Garden in Marrakech on Tuesday.

After a fight occurred between two horses, one of them nervously moved toward a passing car, according to Hassan, a member of an association of horse-drawn carriages in Marrakech.

A video of the incident has circulated on social media, showing several people encircling the damaged vehicle where the horse’s legs were trapped.

With the help of a few individuals, the driver of the carriage managed to pull the animal out of the car. However, the horse has been badly injured and is currently under the care of the animal welfare association.

According to a tourism professional, carriage activity is in full swing right now, as the city of Marrakech experiences its peak season. The professional explained that all 146 of the Marrakech carriages are operating at full pace, which causes the horses to become tired and nervous, and thus, more prone to accidents.

“There is currently pressure on the carriages–horses. Sometimes, they work from 8 a.m. to midnight. We should think about creating shifts, horses must get rest,” the same source added.