Rabat - Moroccan officials were unanimous in their satisfaction with United Nations Security Council resolution 2414 on Western Sahara adopted on Friday. 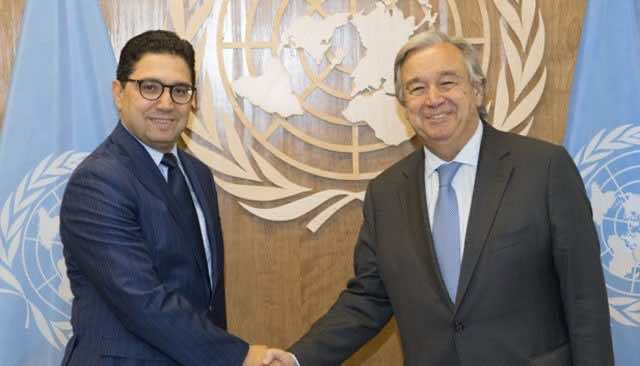 Rabat – Moroccan officials were unanimous in their satisfaction with United Nations Security Council resolution 2414 on Western Sahara adopted on Friday.

Moroccan Foreign Affairs Minister Nasser Bourita said that the Security Council resolution is the “result of Morocco’s strong determination and mobilization to counter all actions aimed at undermining the country’s territorial integrity.”

Expressing satisfaction with  the resolution’s language, Bourita said Friday after the vote that this achievement is attributed to King Mohammed VI actions “to counter all insidious attempts aimed at hindering the interests of Morocco.”

He added that the positive resolution reflects “the leadership of King Mohammed VI, Morocco’s diplomatic strategy and all the living forces of the nation to defend the territorial integrity and national unity.”

Bourita went on to add that the resolution is a response to the repeated Polisario violations east Morocco’s defense wall, in the area known as the Berm.

Bourita added that the resolution reflects the eagerness of the international community to relaunch the political process under the leadership of UNSG Personal Envoy Horst Kohler, on the basis of a new and dynamic spirit.

The resolution, adopted on Friday, extends MINURSO’s mandate for six months pressures the Polisario, and expresses “concerns” about maneuvers in the whole area east of Morocco’s defense wall, including Guerguerate.

The resolution also urged Algeria to shoulder its responsibility and to contribute to the UN-led political process.

According to Morocco’s Permanent Representative to the UN Omar Hilal, the Council’s request is “a logical response to Algeria’s direct involvement, for four decades, in the Sahara issue.”

Hilal told the Press at the UN headquarters on Friday that the Security Council “has acted with firmness, responsibility, and concern to impose the law, in accordance with its mandate for peacekeeping and security in the world.”

Hilal also expressed his satisfaction with the language used by the Council to address its concerns over Polisario’s illegal actions in the region.

“The executive body of the United Nations has used extremely strong language against the Polisario separatists, in order to put an end to these serious provocations in these two areas.”