Rabat - Les Inqualifiables are taking their festival to the next level. 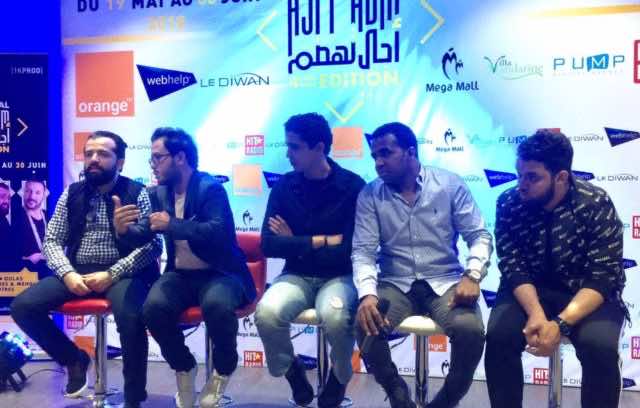 Rabat – Les Inqualifiables are taking their festival to the next level.

In a press conference held at Mega Mall Rabat, the comic duo composed of Amine Belghazi and Obeid Allah Hlal, announced the line-up for the 4th edition of “Aji Tehdem (Come and Digest!)”, which will take place in several cities (and countries) during the holy month of Ramadan.

This year, the event will become a humorous traveling festival that will bring together comics from all horizons such as the iconic Abdelkader Secteur, Winner of the “Comedia Show”; Bassou, the actor of “Lahbib”; Haytam Miftah; and humorist Youssef Ksiyer, among other prominent names on the Moroccan stand-up scene.

Speaking to Morocco World News, the comedian Bassou has expressed his joy at being a part of such an “entertaining festival that gives to the stand-up comedy more visibility.”

“We are very proud and honored to perform with such big names and to see them participate in our show–it’s something that we never thought would happen,” Amine Belghazi told MWN, adding that he want to see the festival go even bigger next year.

Les Inqualifiables will also take on some international cities, traveling to Paris, Montreal, and Quebec.

“During each edition, we present a new show with new ideas and more creativity. This is the year of our consecration, as we’re going global,” said Belghazi to MWN adding that the duo is currently negotiating to perform in the United States.

Amine Belghazi and Obeid Hlal are not just two young people looking for laughs–they are also comedians who aim to help people in need.

Every year, the duo devotes a portion of their income to an association responsible for the care of low-income families during Ramadan.

“Just like last year, we want help the ‘Red Circle’ that is an association of 10 women struggling to improve underprivileged environments in Morocco,” explained the comedian to MWN.

“Aji Thdem” is a festival of humor created by Amine Belghazi and Obeid Hlal to “entertain Moroccans during Ramadan after a day of fasting, and allow them to digest with a smile or a laugh out loud.”

“Ramadan is a special month that’s why we wanted to create something special for this period as there were no stand-ups and few cultural activities,” said Belghazi to MWN, adding that after three successful editions, they wanted to “refine” the “very special concept” that they have created.

Since Ramadan 2015, they have brought together a large audience for the show. Last year, the 3rd annual humor festival attracted 1,500 festival goers in the Mohammed VI Theater of Rabat.

As for their personal careers, Les Inqualifiables told MWN that they are planning to expand into TV appearances, perform at the Jamel Comedy Club during Ramadan, and play their stand-up show in the 2018 Marrakech Du Rire.