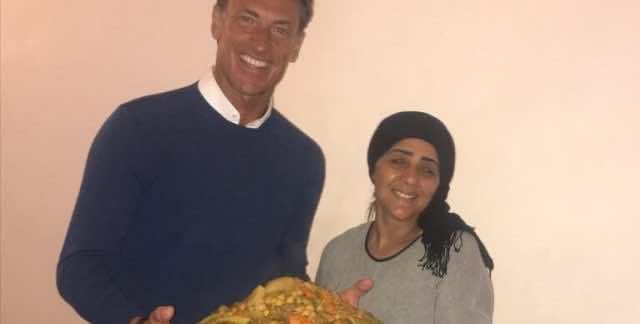 By
Tamba François Koundouno
-
May 5, 2018
Spread the love

On Friday night, the white sorcerer, as football commentators endearingly call him, took to his Twitter account and shared a picture that showed him with a large and beautifully embellished bowl of couscous, Morocco’s world-renowned traditional dish.

The photograph was accompanied by caption that read: “Friday’s traditional Moroccan couscous.”

The Frenchman’s Twitter followers immediately reacted to the post, sharing their views of a “lovable and elegant coach” deeply in love with the culture and ways of life of his host country.

“Our coach likes our tradition. He is a true Moroccan now,” one user said, sharing an older picture depicting Renard in a traditional Moroccan djellaba. Adding that it is warming to have a coach with such a degree of cultural immersion, the same user thanked Renard for “everything [he’s done] for Morocco.”

Others also thanked Renard for his love for Moroccan culture as well as the performances of the national squad since he took over as head coach. “Bring it with you to Russia. It will bring you luck,” another said.

Renard, whose name is now synonymous with Morocco’s present footballing Renaissance, with a remarkable qualification to the World Cup after two decades of absence, has often expressed his love for Moroccan culture and Moroccans at large. He has said that his time in Morocco is one of the best of his coaching career, considering “Morocco’s hospitality” and the “incredible warmth of Moroccan supporters.”

“I don’t think I can live anywhere else,” Renard said in an interview in mid-April with Moroccan magazine Hola!; he declared his passionate love for Africa, a continent where he “feels free” and enjoys “exceptional recognition.”