Rabat - Princess Lalla Hasnaa participated in the Women’s Forum Canada in Toronto Thursday where she held talks with Elizabeth Dowdeswell, Lieutenant Governor of Ontario, members of the Canadian government. 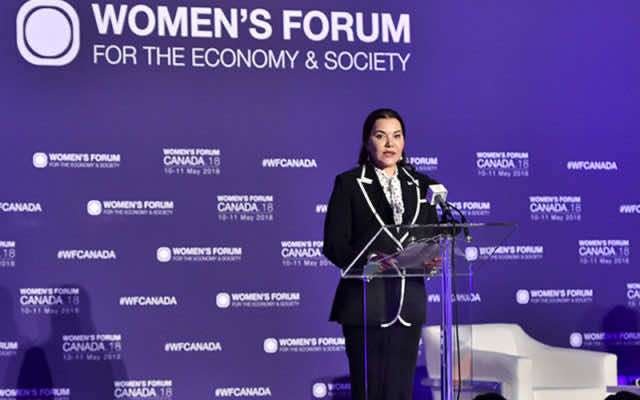 Rabat – Princess Lalla Hasnaa participated in the Women’s Forum Canada in Toronto Thursday where she held talks with Elizabeth Dowdeswell, Lieutenant Governor of Ontario, members of the Canadian government.

The President of the Mohammed VI Foundation for the Protection of the Environment has also delivered a committed speech highlighting the role of women as important figures of change. She also paid tribute to the struggle of the African woman.

“This forum is distinguished by the quality of the participants and the noble ambition of carrying the women’s voice, their values and their perspectives. I salute the action and the fight to make women’s voices heard, to promote their leadership,” Lalla Hasnaa said during her speech.

During Women’s Forum Canada, held under the theme “Bridging the Gap: A G7 Call for Inclusive Progress,” Lalla Hasnaa talked  with Navdeep Singh Bains, Canada’s Minister of Innovation, Science and Economic Development, as well as Maryam Monsef, Minister for the Status of Women.

Lalla Hasna also met Kristi Varangu, Chief of Staff to the Deputy Minister of Natural Resources Canada, and Chiara Condi, Founding President of “Led By Her,” an association that helps women who have been abused.

Initiated by the Women’s Forum for the Economy & Society, a global platform highlighting women’s views and voices on social and economic issues, Women’s Forum Canada is a unique opportunity to generate concrete ideas on to inform and influence the agenda of the G7 Summit scheduled for June 8-9 in Charlevoix, Canada.

Women’s Forum Canada, which brings together nearly 700 political, institutional, and influential business leaders from G7 and beyond, provides a distinctly feminine perspective on issues that affect all of humanity. Its mission is to challenge the G7 to achieve inclusive economic growth.