Rabat - Over 15,000 Palestinian protesters rallied along the Gaza Strip’s border with Israel on Friday against the US decision to move its embassy from Tel Aviv to Jerusalem on Monday. 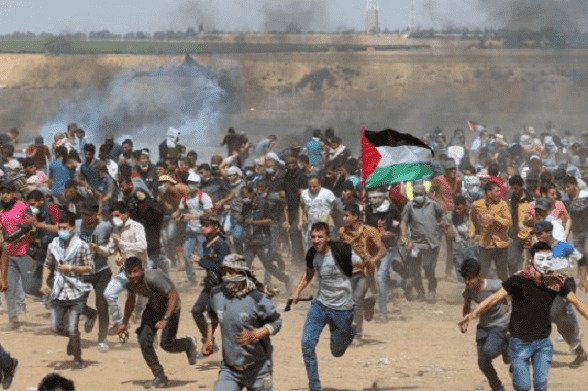 Rabat – Over 15,000 Palestinian protesters rallied along the Gaza Strip’s border with Israel on Friday against the US decision to move its embassy from Tel Aviv to Jerusalem on Monday.

The Palestinian Gaza protests began peacefully on Friday, but Israeli gunfire later killed four Palestinians, including a 15-year old boy, and wounded over 150 on Saturday, according to the Independent.

According to the BBC, Israeli soldiers have killed 40 Palestinians in the Gaza Strip since the launch of the “March of Return.”

On Sunday, activists in Rabat protested in support of the Palestinian people to denounce the US decision to recognize Jerusalem as Israel’s capital.

The National Action Group for Palestine Support and the Moroccan Association of Solidarity on the Palestinian Question organized the march.

Activists in Jordan and Turkey also stormed the streets on Friday, protesting the US embassy move that is scheduled to take place May 14, the anniversary of the creation of the Israeli state, also widely known as the Nakba (Catastrophe) across the Arab world ..

The number of protesters in Palestine is expected to double in the next few days, as the move and the Nakba draw near.

Many Israelis have also warned their government about the threat the US decision poses.

According to Jerusalem Post, Israeli demonstrators marched around Jerusalem’s streets Saturday night, denouncing the Flag March, planned for Monday, and the US embassy move.

Activists from Israeli movements, including Standing Together and Peace Now, chanted slogans against the Israeli government, calling on Israel’s Prime Minister Benjamin Netanyahu to resign.

“Peace is worth more,” protesters said.

Suf Patishi, a member of Standing Together, told the Jerusalem Post that the US move and the Flag March will escalate tensions in the region.

Patishi said, “We are saying here in a clear voice that Jerusalem belongs to the people who live in it – Jews and Arabs, Israelis and Palestinians.”

Patishi added that “whoever loves Jerusalem will not move the embassy just for political gain.”

The activist denounced the US decision to relocate its embassy asserting that it would “only  put [his] life at risk.”

“I would like to see moves that will make our lives better, for both Israelis and Palestinians,” he added.

In December, US President Donald Trump shocked the world with his decision to relocate the US embassy from Tel Aviv to Jerusalem, officially recognizing the city as Israel’s capital.

Despite global condemnation, Trump is standing firm behind his decision. Earlier this month, signs were put up in Jerusalem indicating the direction to the old US consulate building, which will house the new US embassy. The move came amid an ongoing escalation in Gaza between Palestine and Israel.