Rabat- While Israelis in Jerusalem celebrate the new US embassy’s inauguration, the Palestinian death toll in Gaza has doubled, as protests against the US embassy move continue. 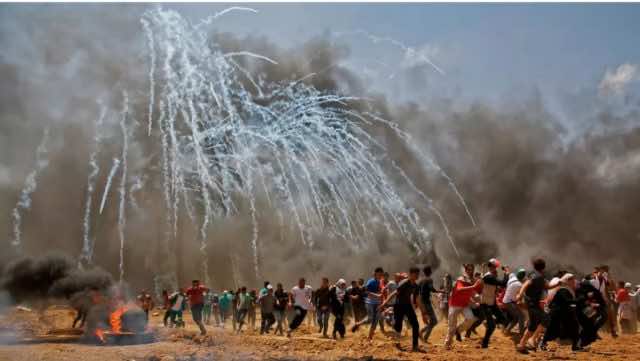 By
Ahlam Ben Saga
-
Ahlam Ben Saga is a Cultural Studies graduate from university Mohammed V of Literature and Humanities in Rabat.
May 14, 2018
Spread the love

Rabat- While Israelis in Jerusalem celebrate the new US embassy’s inauguration, the Palestinian death toll in Gaza has doubled, as protests against the US embassy move continue.

The Gaza protests began on Friday, May 11, in opposition to US President Trump’s decision to relocate the US embassy from Tel Aviv to Jerusalem. The protests were met with Israeli gunfire from throughout the weekend into Monday, May 14.

On Saturday, May 12, over 150 protesters were wounded and four were killed, including a 15-year-old boy, according to the Independent.

So far, death toll of Palestinian protesters killed by Israeli soldiers along the Gaza Strip border has risen to 41–including several teenagers–while at least 1,900 protesters have been injured, as reported by the Gaza Health Ministry.

In line with Trump’s recognition of Jerusalem as capital of Israel, the US embassy officially relocates to Jerusalem today. In the days leading up to the inauguration, protests erupted along Gaza border, including approximately 35,000 Gazans.

According to the New York Times, the Israeli military has testified that some of the crowds of protesters planted explosives, adding that emergency men also hurried to extinguish a spreading wildfire. No Israeli injuries or deaths have been reported thus far.

The current protests coincide with the anniversary of the Nakba (“Catastrophe”), which marks the mass expulsions of Palestinians in conjunction with the creation of the state of Israel. Approximately 700,000 Palestinians died during the event, nearly 70 years ago, in 1948.

On Sunday in Rabat, protests emerged in support of the Palestinian people and denunciation of Trump’s decision to recognize Jerusalem as Israeli capital

Meanwhile, the inauguration of US embassy’s opening in Jerusalem is moving forward as planned.

Around 32 of 86 envoys participated in the inauguration attended by US president Trump’s daughter, Ivanka Trump, and her Jewish husband Jared Kushner.