Rabat- Morocco’s Minister of Foreign Affairs Nasser Bourita denounced Israel’s violence in the Gaza strip, where more than 50 Palestinians were killed the same day of the US embassy’s inauguration Monday, May 14. 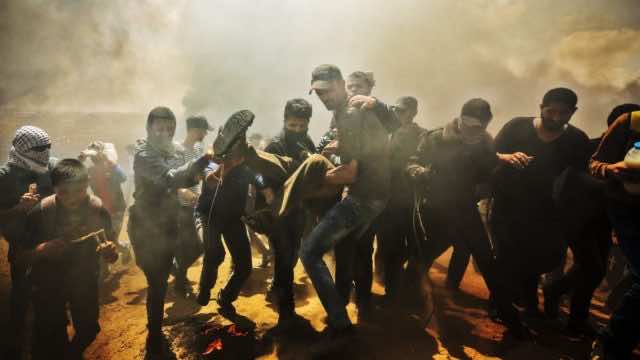 Rabat- Morocco’s Minister of Foreign Affairs Nasser Bourita denounced Israel’s violence in the Gaza strip, where more than 50 Palestinians were killed the same day of the US embassy’s inauguration Monday, May 14.

In a meeting with Spanish Foreign Minister Alfonso Dastis, who arrived in Morocco Wednesday to hold bilateral talks with Bourita, the Morrocan official gave Morocco’s stance on the Gaza massacre, saying that the country strongly denounces the use of force against unarmed Gazan protesters that left 58 dead and 2,410 wounded, according to the latest statistics.

Bourita added that the violence defies international law and will further worsen the situation between Israel and Palestine.

With regard to the kingdom’s stand on the move of the US Embassy from Tel Aviv to Jerusalem, Bourita referred to King Mohammed VI’s letter to the president of Palestine, which stressed Morocco’s condemnation of the embassy relocation against UN international law.

The letter said: “We follow with deep concern the implementation of the US administration’s decision to recognize Al-Quds as the capital of Israel and to move its embassy there.”

Several countries condemned Israel’s mass killing of Palestinians along the Gaza border. The Palestinans had rallied in protest of the US embassy move. Turkish president Recep Tayyip Erdogan expressed outrage towards Israel, calling it a “terrorist state,” and recalling Turkey’s ambassadors to the US and Israel.

France has also condemned the massacre:

French President @EmmanuelMacron condemns the violence exerted by the Israeli armed forces against Palestinian demonstrators in #Gaza and disapproves of the American decision to transfer the US embassy to #Jerusalem. pic.twitter.com/vHZX0V8A84

The UK also responded to the mayhem caused by Israeli forces, saying: “We are concerned by the reports of violence and loss of life in Gaza.”

British govt’s minister for the Middle East, Alistair Burt, issues statement after numerous Palestinians were killed and injured in Gaza and the West Bank https://t.co/uGhjxydvEY

Germany has also joined the international condemnation, stating “The right to peaceful protest must also apply in Gaza.”

“The right to peaceful protest must also apply in Gaza.”

Qatar expressed “its condemnation of the brutal massacre:”

#Qatar expresses its condemnation of the brutal massacre by Israeli occupation against unarmed Palestinians during their peaceful & protest against the US unilateral decision to move its embassy to #Jerusalem. https://t.co/0unQp2I2Kl pic.twitter.com/dy5DoEyXUd

Kuwait, one of the first countries to condemn the Israeli violence, called on the UN security council to hold an emergency meeting on the issue:

Kuwait called for an emergency meeting of the UN Security Council over the violence in Gaza.

At least 52 Palestinian protesters were killed by Israeli fire on the same day the U.S. opened its embassy in Jerusalem. pic.twitter.com/mQNxaZtaO1