Rabat- It appears that many more artists will receive special letters from King Mohammed VI, who recently honored Moroccan singer Dounia Batma, Emirati singer Ahlam, and MBC journalist Mustapha Al Agha with handwritten letters, thanking them for their concern for his recovery. 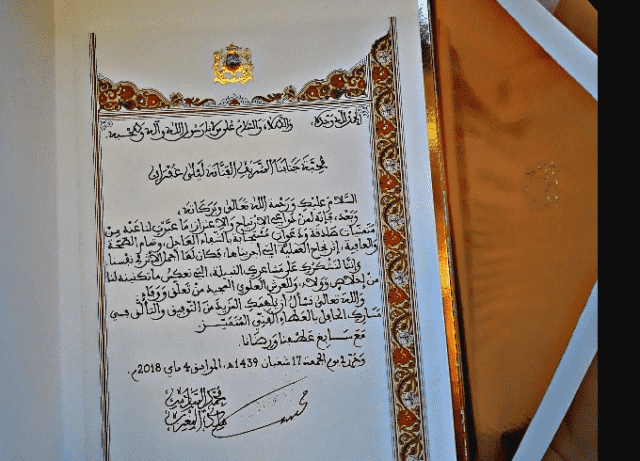 By
Ahlam Ben Saga
-
Ahlam Ben Saga is a Cultural Studies graduate from university Mohammed V of Literature and Humanities in Rabat.
May 18, 2018
Spread the love

Rabat- It appears that many more artists will receive special letters from King Mohammed VI, who recently honored Moroccan singer Dounia Batma, Emirati singer Ahlam, and MBC journalist Mustapha Al Agha with handwritten letters, thanking them for their concern for his recovery.

After King Mohammed VI underwent a successful heart surgery in February in Paris due to a heart rate disorder, many artists expressed concern for the sovereign’s health and conveyed sentiments of joy upon his safe return to the kingdom in April.

Emirati singer Ahlam, who dedicated a song to King Mohammed VI upon his return home, posted a photo of the handwritten royal message on her Instagram account Thursday. The letter expressed the King’s thanks for her concern:

“Your prayers and heartfelt manifestations expressed at my recovery following a successful surgery have touched my heart,” the sovereign wrote. ”I thank you immensely for your gentle sentiments that I dearly appreciate.”

In response, Ahlam wrote: “May God protect you and bless you. Thank you for giving me this great honor.”

On the King’s return to Morocco, Ahlam took to her Instagram to congratulate the Moroccan people, wishing the king a long life.

Animator and journalist Mustapha Al Agha, from the Middle Eastern channel MBC, has also received royal thanks from the sovereign, which he showed to his followers on Twitter: “I was honored today with this letter from His Majesty, the King of Morocco Mohammed VI, handed to me by his ambassador, and I cannot thank him enough for this gesture that reflects his modesty and significant morals,”  he wrote.

In the same way, the King honored Moroccan singer  Laila Ghofran, for her support on social media and for wishing him a speedy recovery. Ghofran posted a picture of the royal letter on her official Instagram account and wrote: “I was astonished yesterday after I found a thank you letter from His Majesty King Mohammed VI, who never forgets us and always showers us with love and affection as his people…you will always be the greatest of men and King of kings.”

For her song “Ala Slamt Sidna” (All Hail to our King) on the sovereign’s return, Moroccan singer Fatima Zahra Laaroussi also received a letter.

Laaroussi wrote on her Instagram: I want to share my great happiness which is my lord and King Mohammed VI’s royal letter. The letter which left a deep impression on me will be my inspiration and motivation for more hard work and productivity.”

Dounia Batma received the handwritten letter from the sovereign for her song “Bcharat Khir,” which she dedicated to him following his return to Morocco.

Batma was touched with “tears in her eyes,” as she wrote on her Instagram: “Thank you for this appreciation and attention. Thank you for following up all the honorable Moroccan works. Thank you for your support. I am proud that you love my work. This proves that I am in the right. I will always cherish this certificate from my beloved King.”

Several other Moroccan celebrities, including RedOne, Hatim Ammor, Ibtissam Tiskat, Leila Hadioui, and Asma Lmnawar took to social media to demonstrate their love and concern for the sovereign’s health and expressed relief after the surgery was announced successful.