Rabat-  On the first Friday of Ramadan, King Mohammed VI inaugurated the “Lalla Latifa” mosque in Sale, performed the Friday prayer at the new mosque, and will preside over the inaugural religious lecture of the holy month. 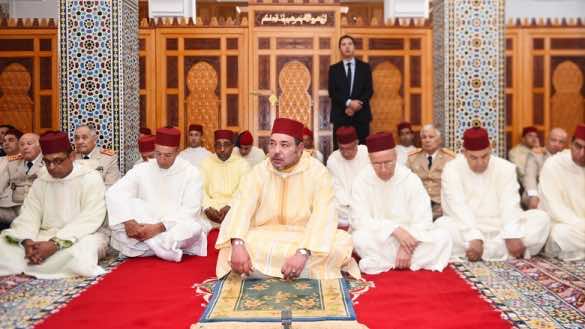 Rabat-  On the first Friday of Ramadan, King Mohammed VI inaugurated the “Lalla Latifa” mosque in Sale, performed the Friday prayer at the new mosque, and will preside over the inaugural religious lecture of the holy month.

Named after the King’s mother, King Hassan II’s widow Princess Lalla Latifa, the mosque has a surface area of 1,200 square meters with a capacity to house over 1,800 worshipers, reported the state-owned news, Maghreb Arab Press (MAP).

The new mosque in Hay Essalam, Sale, consists of a Qur’anic school, two prayer halls, and accommodations for the imam and muezzin (the reciter of the call to prayer). The mosque’s design is a combination of traditional architecture with a modern touch.

Today’s inauguration comes in line with the state policy to build mosques across the country.

Tonight, King Mohammed VI is to chair the first religious lecture of Ramadan, given by Minister of Endowments and Islamic Affairs, Ahmed Toufiq, themed “The Rights of the Spirit and its Dimensions,” with relevance to Qur’anic Surah 91 (The Sun) verses 7-10.

The lecture will be aired on Friday at 7 PM on Moroccan TV channels and Radio stations.