Rabat  - King Mohammed VI has presided over the first religious lecture of the holy month of Ramadan at the Royal Palace of Rabat. 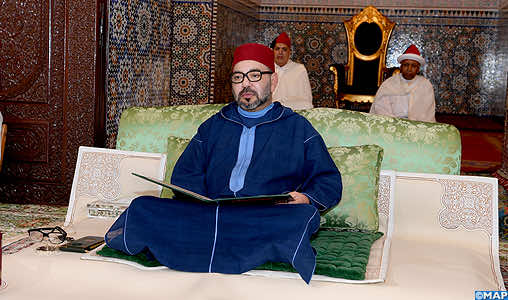 Rabat  – King Mohammed VI has presided over the first religious lecture of the holy month of Ramadan at the Royal Palace of Rabat.

The lecture was given by Endowments and Islamic Affairs Minister Ahmed Toufiq on the theme “The Rights of the Spirit and its Economic Dimensions.” The lecture drew on Surah 91 (The Sun) verses 7-10 “And the soul and He who proportioned it, and inspired it its wickedness and its righteousness, he has succeeded who purifies it, and he has failed who instills it.”

Toufiq recalled at the beginning of his speech that noteworthy scholars of the Islamic Ummah (Community) have studied all that is related to the rights of the soul in the Holy Qur’an and the Sunnah (the way) and distinguished between the absolute rights and the collective rights, noting that the latter are also the rights of Allah, His Prophet, the individual and the community.

The individual has first rights to himself, then come the collective rights that naturally impact the community and especially its economic aspects, he said.

Toufiq then made it clear that the theme of his talk would be based on four pieces of evidence and one conviction.

As for the pieces of evidence, the speaker first cited the causal relationship between human behavior and economic choices. Second, he noted that human behavior manifests itself through politics, which is basically the management of human weakness. The third piece of evidence, he went on to say, is to consent that human behavior depends on the desires of the soul of the individual which push him to consume. The fourth is that the market is a meeting point between the economy, politics, and the soul.

He noted, as it is stated in the Qur’an, that the conviction is the fact of shaping the soul so that it can guide the behavior of men to ultimately build a lifestyle in which the economy is just one dimension among others.

In this respect, the soul is defined as an acting force from which stems a certain behavior, said Toufiq. He added that Allah has sworn to shape the soul and make it pure and loving by nature.

The purification of the soul is the right of the soul from which several other rights derive and is therefore the foundation for building a healthy personality in terms of religion, he said.

Toufiq noted in this sense that the Holy Qur’an has warned against parsimony because it constitutes an injustice towards the soul and an attack on one of its fundamental rights, noting that piety, which involves the purification of the soul, is both the origin and the result of an economic choice imbued with the virtues of altruism and generosity.

At the end of the lecture, the King was greeted by Special Envoy of Nigeria Ahmed Aboubakar Rifai, President of the Forum for Peace Promotion in Muslim Societies Sheikh Abdallah Ben Biyah, and Director of the World’s Centre for Renewal and Orientation in London Shaikhouna Ben Abdellah Ben Beyah.

Afterwards, Toufiq handed the King a copy of a calligraphy manuscript in the Moroccan style, which dates from the 19th century. The original version of the manuscript is kept in the library of the Ben Youssef Mosque in Marrakech.