Rabat - Authorities arrested a suspect at Menara Airport in Marrakech after he was caught carrying a plastic bag containing “suspicious materials.”

Rabat – Authorities arrested a suspect at Menara Airport in Marrakech after he was caught carrying a plastic bag containing “suspicious materials.”

The bag contained “ten tiny gas bottles, usually used for purposes such as camping, accompanied by ten cotton wipes and a bottle of kitchen oil.”

A statement from the General Directorate of National Security (DGSN) said on Wednesday that security forces arrested a 35-year old man at about 4:15 AM. The suspect already had a criminal record for drinking in public and for setting a fire deliberately.

Initial investigations conducted by DGSN showed that the suspect appeared to have symptoms of mental imbalance and that he was admitted at several hospitals specializing in the treatment of mental and psychological diseases.

Police are investigating the suspect’s motives. The defendant has been transferred to a hospital to examine his mental state. 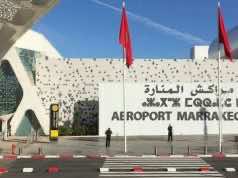