Rabat - Was he messing with his fans? Cristiano Ronaldo’s statement after Real Madrid won the Champions League has raised a lot of questions. 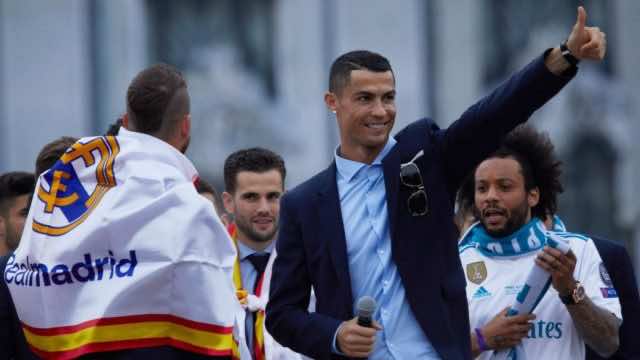 Rabat – Was he messing with his fans? Cristiano Ronaldo’s statement after Real Madrid won the Champions League has raised a lot of questions.

Saturday night after the coronation of Real against Liverpool (3-1), CR7 excited the media sphere by leaving some doubt about his future.

“It was good to play for Real…. I will talk to the fans soon,” the Portuguese football player told journalists, who were quick to report his departure from the Spanish club, as he was rumored to be courted by the PSG.

Sunday night in the center of Madrid, where Merengues traditionally go to celebrate their titles, the sensational footballer was giving a different speech.

“It’s a pride to play in the biggest club in the world. It’s very important for me, I feel comfortable with your passion, the players who motivate me, the coaching staff, to get better and better. It’s my DNA, I’m like that. 1, 2, 3 Hala Madrid. Thank you, guys, and see you next year,” he said to delighted Madrid fans.

According to sports outlet Marca, Ronaldo’s statement is only his “umpteenth blow of anger.” Ronaldo’s “extension is in progress” with an estimated salary of EUR 30 to 33 million per year.

According to the press, the five time winner of the Ballon d’Or does not feel sufficiently defended by the club and is not remunerated for the value he brings.

Ronaldo, 33, extended his contract in November 2016 until 2021, for an estimated annual salary of EUR 23.6 million. But his eternal rival, Barça’s Lionel Messi, takes in more (counting gross wages, premiums, and advertising revenue) over a season: EUR 126 million to Ronaldo’s 94 million.