Rabat - The United Nations has honored seven Moroccan peacekeepers, who died during peacekeeping operations in 2017 as part of the UN Mission in the Central African Republic (MINUSCA).

Rabat – The United Nations has honored seven Moroccan peacekeepers, who died during peacekeeping operations in 2017 as part of the UN Mission in the Central African Republic (MINUSCA).

In a ceremony at UN headquarters in New York, the UN awarded the seven blue helmets with the Medal Dag Hammarskjold on Friday, June 1, in recognition of the Moroccans’ sacrifices during their peacekeeping duties.

The ceremony marked UN International Day: 70 Years of service and sacrifice, paying tribute to more than 3,700 peacekeepers representing MINUSCA. The ceremony also honored 128 peacekeepers who died in the field with the Medal Dag Hammarskjold.

The ceremony was attended by UN Secretary-General Antonio Guterres and Omar Hilale, Morocco’s Permanent Ambassador to the UN. Hilale represented the Moroccan peacekeepers who died and received the medals from Guterres.

The UN chief paid tribute to the “men and women who lost their lives while serving under the flag of the United Nations.” He also commended the courage of those who sacrificed their lives for peace.

Guterres confessed that peacekeeping has become increasingly “dangerous and our peacekeepers are increasingly targeted.” He noted that in 2017, 61 peacekeepers lost their lives in attacks, the “highest number in a quarter century.” He further explained that many other peacekeepers died due to diseases or other incidents.

Guterres also recalled the launch of the Action for Peacekeeping initiative in 2018, which included measures to reinforce partnerships with member states to handle peacekeeping challenges. 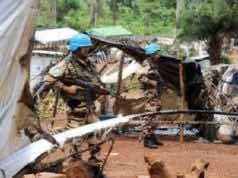 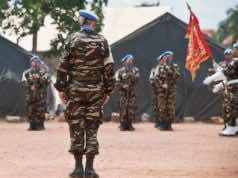