Rabat - “It is impossible not to have the 2026 World Cup bid,” said a very determined Jamel Debbouze. The French-Moroccan comedian has agreed to meet Youtube influencer Saad Abid to endorse Morocco’s World Cup bid in his own unique way.

Rabat – “It is impossible not to have the 2026 World Cup bid,” said a very determined Jamel Debbouze. The French-Moroccan comedian has agreed to meet Youtube influencer Saad Abid to endorse Morocco’s World Cup bid in his own unique way.

On Day 9 of his incredible journey of “meeting 26 celebrities, in 26 days, in 26 countries” to score symbolic support for Morocco 2026 in the #Maymkench2026 (impossible) challenge, Abid flew to Paris to spend a funny moment with the proud Moroccan comedian Debbouze.

In a video posted on his social media, Abid shared about his trip to the French capital. Having just landed at the airport, he found a supporter of #Maymkench2026 who agreed to drop him off at his hotel.

After a night’s rest, the Moroccan activist met the French-Moroccan humor sensation near the Seine “to explain the project.”

“I’m sorry I have a little asthma,” the actor of “Les indigènes” joked before giving his breath, symbolically inflating the hopes of Moroccans to host the World Cup in 2026. Debbouze then nominated an unexpected person to take on the challenge.

After joking about nominating the late boxer Mohamed Ali, who Debbouze claims has “his number in heaven,” the humorist nominated another almost unreachable Mohamed.

“I’ll name you someone less reachable: his majesty the king of Morocco. If he gives you his breath my brother, it’s not a ball that you will have, it’s a balloon!” said the 42-year-old artist.

Afterwards, Abid accompanied the native of Trappes in a film shoot, where he was able to find Gad Elmaleh, before following Jamel to the recording of an episode of the Burger Quiz, where he asked for the breath of French actor Jean Dujardin.

Can Saad Abid take on the most difficult challenge of his adventure yet and score the King of Morocco’s support? To be continued … 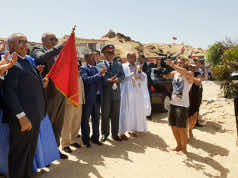