Rabat - Algerian author and journalist Mohamed Benchicou has criticized the political status and economic situation of the Algerian regime in a recent interview with “Le Point Afrique,” a French news outlet dedicated to African news.

Rabat – Algerian author and journalist Mohamed Benchicou has criticized the political status and economic situation of the Algerian regime in a recent interview with “Le Point Afrique,” a French news outlet dedicated to African news.

The journalist described Algeria as a “stateless” nation subjected to “corruption and predation.”

Discussing the economic crisis in Algeria, Benchicou said that the regime has brought the country to “its knees” in the past two decades, adding that the national currency continues to devalue to the point of becoming “funny money.”

The journalist also criticized trade and investment in the country, emphasizing that the country imports almost “everything it consumes and produces almost nothing, except hydrocarbons.”

The lack of economic plan is a major concern for the country, according to Benchicou. He said that the economic crisis in the country made the “IMF [International Monetary Fund] concerned about the unemployment rate.” He said that Algeria lives on an artificial image.

“We are not masters of our future either economically, socially, or politically. Everything is done to let things rot and to worsen delays,” he added.

He further explained that the delay and lack of development is the result of a “repressive regime led by very powerful groups, who do not want to be held accountable or withdraw from their privileged position.”

He concluded his interview saying that Morocco’s eastern neighbor is losing sovereignty at all levels, including economic and political spheres.

“It is a country which we can say that it is moribund, but well made up to create an illusion and to receive visitors,” the journalist said.

Algerian journalist Lila Haddad recorded a video at the European Parliament’s studio in Brussels, denouncing the Algerian regime for “undermining”  the dignity of Algerian citizens.

The journalist, who is based in Brussels, said that Bouteflika is “nothing more than a heap of flesh exposed to the world.”

“Algerians have become the laughing stock of the world. Their dignity has succumbed to their own humanity to form a mountain of shame,” she added. 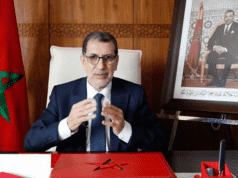