New York - Razan al-Najjar was a 21-year old Palestinian volunteer medical nurse who was deliberately shot by an Israeli sniper last Friday, June 1st. Thousands of people gathered to mourn her death at her funeral held on Saturday. 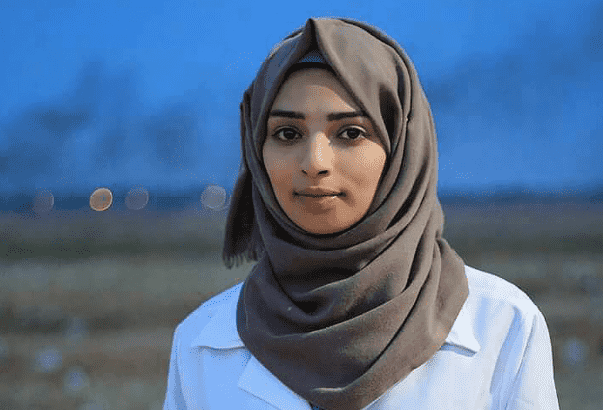 By
Paola Garcia
-
Paola Garcia is a writer and translator from Chihuahua, Mexico.
Jun 4, 2018
Spread the love

New York – Razan al-Najjar was a 21-year old Palestinian volunteer medical nurse who was deliberately shot by an Israeli sniper last Friday, June 1st. Thousands of people gathered to mourn her death at her funeral held on Saturday.

Razan was shot while approaching to help peaceful Palestinian protesters who had been wounded by the Israeli military. She wore white, which indicated she was a nurse, and waved her hands, showing she had no weapons and was a humanitarian worker. There is no possible way to interpret her killing other than as a cold-blooded intentional murder by occupiers who have entirely lost their humanity and have no mercy for the people they have been torturing and dispossessing of life and land for over 70 years.

Razan al-Najjar is the 119th Palestinian killed since the peaceful protests began in March. These demonstrations, titled “Great March of Return,” call for the right to return for the Palestinians who have been dispossessed since 1948. A group of United Nations agencies issued a statement condemning the murder of al-Najjar, “a clearly identified medical staffer,” calling it “particularly reprehensible.”

Al-Najjar was a strong and courageous young woman, committed to helping her community. She received no salary for her work and wanted no compensation. She did her work out of love, for the sake of God, and for her community. She described feeling a responsibility to do all she could to alleviate the unbearable pain Palestinians in Gaza are forced to endure daily. She also wanted to demonstrate that despite women everywhere being judged, women are in fact, in al-Najjar’s words “stronger than any man.”

The murder of Razan al-Najjar and the entire occupation project, including the ethnic cleansing of Palestinians and their genocide, are possible through mechanisms that dehumanize Palestinians. Israeli soldiers view them as “notches on their belts” as Sheikh Suhaib Webb aptly wrote on a recent Instagram post. There is absolutely no way to construe this genocide as a “conflict” or as “clashes” because Israel has overwhelming superiority, limitless resources, and the support of the most powerful nation in the world. Palestinians have rocks. They lack access to basic resources, including water, food, and medical aid. They are under siege, unable to leave the prison they are force to exist in. How, then, is this a conflict?

How can this illegal and monstrous occupation be called anything but what it is, a colonialist, genocidal venture? It is every single person’s responsibility to do absolutely everything within our power to stop this shameful calamity. If you can write, then write. If you can donate money to reliable organizations such as Medical Aid for Palestinians, please do. In whatever form is most suitable to you, please, it is crucial to raise awareness and prevent with all our might the sanitizing of this massacre and acceptance of the brutality Palestinians are enduring. We are all accountable for it.

Countless former IDF soldiers have spoken about the horrors of the occupation, about having to destroy entire towns, receiving orders to kill civilians in cold blood, terrorize them nightly by entering their homes shouting and destroying their things, having to arrest people, including children, who posed absolutely no threat, forcing the elderly out of their homes and throwing them out to live amongst the rubble, in order for more illegal settlements to be built by the monstrous bottomless greed machine called Israel.

In a recent account, Yonatan Miller, a former soldier narrates being surprised upon hearing Palestinians referred to as human beings who deserve dignity. He realized that he had never before acknowledged their humanity. This is the level we, as a global community, have sank to. Please, I urge you to inform yourself of the reality and cease accepting nonsensical fictions that allow the perpetration of these monstrous crimes to continue.

Since 1948 and until today, approximately 510,000 Palestinians have been killed, which by most definitions constitutes a genocide. A genocide is a rationally calculated and systematic mass annihilation of a population, a structure of hatred that targets a whole class of people just because they are who they are. The Palestinian genocide, which is ongoing, has been facilitated by the biased information published by the Western press for over a century. The mainstream Western press is the voice of the state and its mechanisms are created by and embedded in the global power structures.

The systematic erasure of Palestinians at the hands of the Zionists, backed by international world powers, also constitutes a form of ethnic cleansing, which is a well-defined crime against humanity. The United Nations’ official definition of ethnic cleansing is “rendering an area ethnically homogeneous by using force or intimidation remove from a given area persons of another ethnic or religious group.”  Ilan Pappé, citing Drazen Petrovic, defines ethnic cleansing as a “well-defined policy of a particular group of persons to systematically eliminate another group from a given territory on the basis of religious, ethnic or national origin. Such a policy involves violence and is very often connected with military operations. It is to be achieved by all possible means, from discrimination to extermination, and entails violations of human right and international law.”

The crimes against the Palestinian people perfectly fit the definition of ethnic cleansing. To give but one example, in a 1937 letter to his son, David Ben Gurion, wrote: “We will expel the Arabs and take their place. In each attack a decisive blow should be struck resulting in the destruction of homes and the expulsion of the population.” To the Jewish Agency Executives Ben-Gurion stated in 1938: “I am for compulsory transfer, I do not see anything immoral in it.” Much earlier than this, the early Zionist immigrants who arrived in Palestine, such as Chaim Weizman, openly admitted that they hoped the Arabs would soon no longer be the majority.

I will end this short article with a poem by Mahmoud Darwish, a resilient and beautiful human being who refused, despite the pain he endured throughout his life, to ever sink to the level of the occupiers. Finally, I encourage you to support Palestinian artists, including the brilliant and courageous Rafeef Ziadah, a Canadian-Palestinian spoken word artist and activist. Her debut CD “Hadeel” is dedicated to Palestinian children, who, in the face of bombs, still fly kites and remember the names of their villages in Palestine, most of which have been destroyed by the revolting State of Israel. The title of her work is “Hadeel,” in honor of these youth, who say they can still hear the sound of cooing doves over Gaza.

May you rest in peace dearest Razan. I offer my most sincere condolences to Razan’s family, friends and loved ones, including her parents, Ashraf and Sabreen al-Najjar, with the promise that we will never forget Razan. She is a martyr and a strong example of courage, dignity and strength for every single human being.

To a killer:
if you had looked into the face of your victim
and thought carefully,
you might have remembered your mother in the Gas Chamber,
and freed yourself from the rifle’s prejudice
and changed your mind.
Come now, this is no way to restore an identity!