Rabat - In an unprecedented move, Minister of Governance and General Affairs Lahcen Daoudi participated Tuesday night in a sit-in held by workers at Centrale Danone in front of the parliament in Rabat. The minister’s participation sparked outrage among Centrale Danone boycotters who decried Daoudi as the first minister to stand against the demands of citizens. 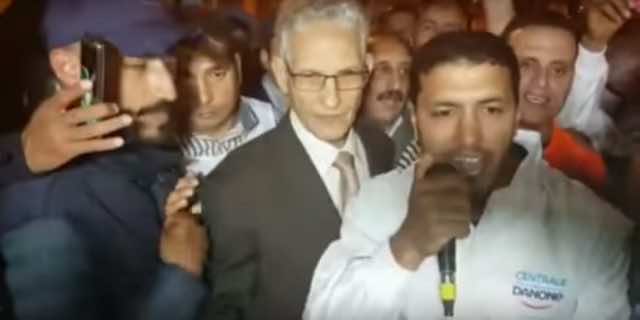 Rabat – In an unprecedented move, Minister of Governance and General Affairs Lahcen Daoudi participated Tuesday night in a sit-in held by workers at Centrale Danone in front of the parliament in Rabat. The minister’s participation sparked outrage among Centrale Danone boycotters who decried Daoudi as the first minister to stand against the demands of citizens.

Approximately 2,000 workers of the dairy company protested in a sit-in held late on Tuesday in front of the parliament. Daoudi, along with the protesters,  chanted slogans against the boycott that is targeting the high prices of the company’s products.

The workers were protesting losing their jobs after a month and a half of the boycott, which started on April 20.

Carrying banners denouncing the boycott, the workers also blamed the government for “degrading the purchasing power of Moroccans,” according to Reuters.

Several Moroccan media outlets reported that Head of Government Saad Eddine El Othmani has expressed anger over the participation of Daoudi in the sit in. Sources close to El Othmani also claimed that he called on Daoudi to denounce his participation in the sit-in.

Daoudi, however, denied that El Othmani expressed anger. “He called me to ask if I was participating in the sit-in and I confirmed affirmatively.”

He added that the workers asked him to participate in the boycott and he accepted their request.

“I am a citizen before being a minister,” said Daoudi.

The workers’ protest did not surprise boycotters as much as Daoudi’s participation.

Criticizing Daoudi,  a boycotter tweeted: “Is Daoudi the Minister of Agriculture or the owner of Centrale Danone?”

Daoudi has been subject to backlash since the launch of the boycott for statements he made to the Moroccan press.

Defending Centrale Danone, the minister said in an interview with Moroccan television channel Al Oula on May 31 that the boycott is ongoing for “no reason,” adding that the “instigators of this movement are playing with fire.”

He also claimed that the company’s profit margin is 0.9 percent.  Many people supporting the boycott have heavily criticized and trolled Daoudi for his statements on social media.

The photo of Moroccan football player, Mehdi Benatia, who sheltered a little girl from the rain during a friendly game against Slovakia, has provoked boycotters. A Twitter posted an edited photo of the footballer, depicting Daoudi sheltering Centrale Danone from running boycotters.

Other boycotters changed the name of Centrale Danone into Daoudi.

Another internet user described Daoudi as “the most pathetic person in Morocco.”

“Lahcen Daoudi does not represent me as a minister. He only represents Centrale company.”

“If Doaudi is not removed from government after protesting at parliament, let us pray for the country.”

The boycott pushed Centrale Danone to cut 30 percent of its orders from 12,000 farmers on May 29. The company also announced a loss of MAD 150 million in the first half of 2018 on June 4.

For the past seven weeks, the government and officials of Centrale Danone have been calling on citizens to end the boycott on Centrale Danone. Boycotters, however, declined the request, demanding the company to lower its prices.

The campaign is also targeting Sidi Ali mineral water and Afriquia gas. The government, however, has yet to take a stance regarding the boycott against the other two companies.