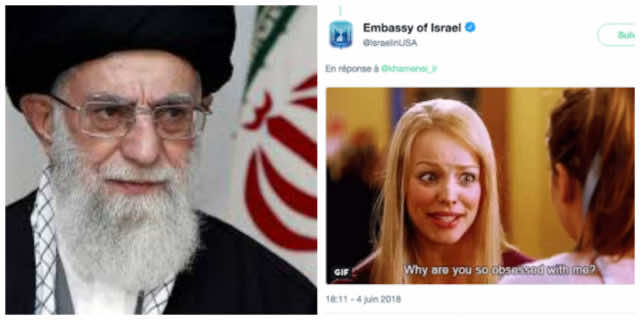 Rabat – The Embassy of Israel has responded to Iranian Ayatollah Ali Khamenei who called the Jewish state a “cancerous tumor” that must be “removed” on Twitter with a mocking GIF.

Israel mocked Iran’s threats to destroy it on Monday, responding to Iran’s Supreme Leader Ayatollah with an animated GIF (Graphics Interchange Format)on Twitter, where it wrote “Why are you so obsessed with me?” featuring American actress Rachel McAdams from the 2004 American comedy, “Mean Girls.” 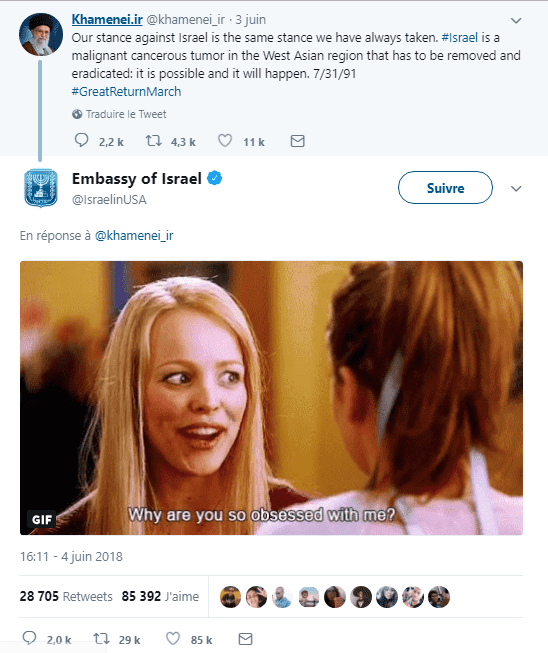 The Embassy’s tweet went quickly viral, generating 27,750 retweets and thousands of reactions from social media users who were shocked by the unusual reaction.

“2018 is wild,” “I was not expecting that at all,” “if the embassy of Israel really just replied to Khamenei with a Regina George GIF, we are living in an alternative universe,” commented the public whose opinions seemed to be divided regarding this tweet.

If some thought that the GIF was inappropriate and childish, others applaud the creativity of the embassy’s answer.

These reactions come after a series of tweets in which Khamenei harshly criticized Israel for its handling of the Hamas’ protests along the Gaza border.

“Our attitude towards Israel is the same as always,” he said. “#Israel is a malignant cancerous tumor in the West Asia region that must be eradicated: it is possible and it will happen,” he wrote in another tweet. 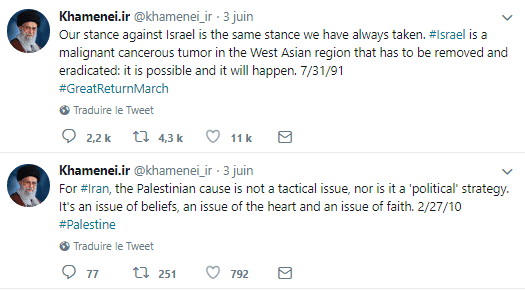