Rabat- Head of Government Saad Eddine El Othmani’s office is under fire after Minister of Governance and General Affairs Lahcen Daoudi joined Centrale Danone’s sit on Tuesday. Daoudi has resigned, but his colleagues’ statements against the boycott have angered boycotting Moroccans. 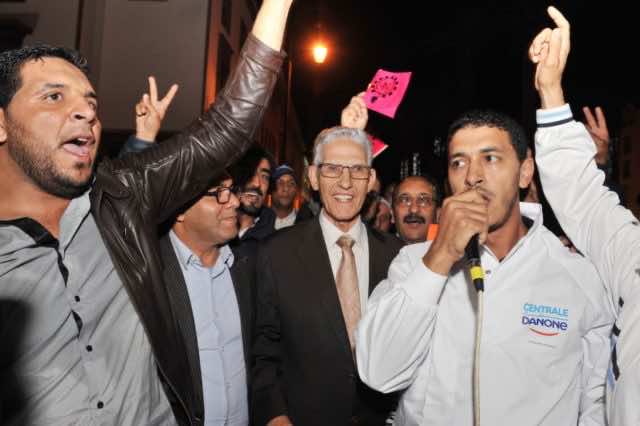 Rabat- Head of Government Saad Eddine El Othmani’s office is under fire after Minister of Governance and General Affairs Lahcen Daoudi joined Centrale Danone’s sit on Tuesday. Daoudi has resigned, but his colleagues’ statements against the boycott have angered boycotting Moroccans.

Moroccan boycotters have acidly criticized the government ever since the launch of the boycott campaign against three giants in the market for high prices. Boycotters seem to be losing trust in the government, considering some officials as their “enemies” for their harsh comments against the boycott.

The government’s stubbornness not to hear the demands of boycotters has convinced boycotters that it represents the interests of companies more than it does of citizens.

Since the launch of the boycott on April 20, seven weeks ago, the government and its officials have been urging citizens to end the boycott, fearing the consequences for the national economy.

The boycotters resisted all requests and apologies, making their goal of lower prices ahead of everything. No statements could convince boycotters to end the boycott as Centrale Danone has not considered the idea that lowering its prices could avoid further damages and crisis.

Instead, the government and the boycotted company denied any increase of prices since 2013, expressing reluctance to accept the public’s demands.

The tension risen between boycotters and officials came after Minister of Agriculture and Fisheries Aziz Akhannouch, whose Afriquia gas firm is one of the boycotted companies, showed his support for Centrale Danone.

The comments of Minister of Economy and Finance Mohamed Boussaid fanned the flames after he called people supporting the boycott “madawikh,” translated as “morons” in English.

While boycotters were expecting the government to intervene to prevent the situation from worsening, officials  singled out Centrale Danone and defended the company during interviews and press conferences.

The latest action came from resigned Minister of Governance and General Affairs Lahcen Daoudi, who participated in a Tuesday night sit-in held by employees of Centrale Danone in front of the government.

Daoudi’s action generated outrage nationwide, with boycotters expressing anger over his protest against the demands of citizens.

The reaction of boycotters forced the Head of Government and leader of the Justice and Development Party El Othmani to harshly denounce Daoudi’s participation in the sit in, decrying it as “unreasonable and inappropriate” during an extraordinary of the party held on Wednesday night.

Read Also: Uproar in Morocco After Minister Participates in Sit-in Against Boycott

Despite its opposition to to the boycott, the ruling PJD led by El Othmani turned its back on Daoudi.

El Othmani’s coalition said that it “appreciated” Daoudi’s resignation request to be dismissed from his ministerial responsibility.

The party accepted Daoudi’s resignation, pending the approval of King Mohammed VI, in accordance with the Moroccan constitution.

Moroccan press reported on Wednesday that El Othmani called Daoudi on Tuesday night to denounce his participation in the sit-in. Daoudi, however, denied this, claiming that the head of government only called him to confirm his participation.

Nevertheless, the  government has long backed Centrale Danone. On May 31, El Othmani’s cabinet issued an official statement, urging citizens to avoid  further damage to the company, its partners, and foreign investment in Morocco.

After demanding the resignation of Daoudi, many Moroccans online called for the dismissal of El Othmani’s government in response to the “harsh” comments made by its ministers against the boycott and its demands.

“I like the idea of demanding the dismissal of government and the parliament and president of municipalities and dissolution of parties to start from scratch.”

“One after one until they know the value of madawikh # boycotting,” said another on Facebook.

Besides Centrale Danone, the boycott is also targeting Afriquia gas and  Sidi Ali.

The boycott also forced the company to buy 30 percent  less milk from its farming partners. Danone has also broken temporary contracts with other partners.