Rabat - France and Morocco are joining forces to fight against global warming, to protect the environment, and to preserve biodiversity. 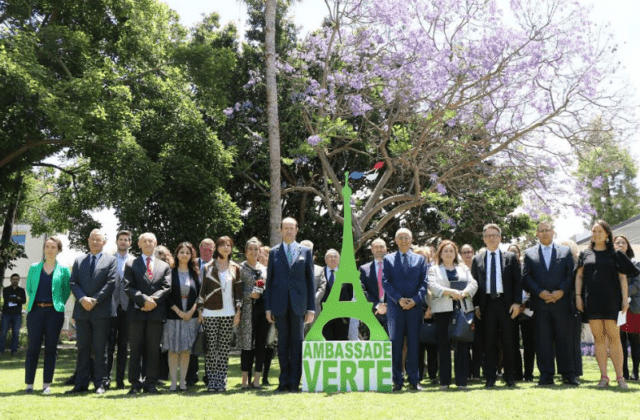 Rabat – France and Morocco are joining forces to fight against global warming, to protect the environment, and to preserve biodiversity.

The French ambassador in Morocco, Jean-François Girault, inaugurated  the French initiative “Green Embassy” on Tuesday, June 5, to allow the diplomatic representations of the Hexagon abroad to reduce their energy footprint.

The initiative was conceived in the spirit of the Tangier appeal launched by King Mohammed VI and the president of the French Republic on September 20, 2015, as a relay passage between the COP21 of Paris and the COP22 of Marrakech.

In 2015, the French Embassy in Rabat was one of the first diplomatic representations abroad to adopt a “Green Embassy” plan. Three years after its launch, the results are tangible: the elimination of its oil-powered boiler, the reduction of electricity consumption by 17 percent in 2017, the recycling of 10 tons of paper per year and all electronic waste, and the development of a sustainable garden that consumes little water.

These measures, consistent with the efforts made by Morocco, particularly in terms of sustainable housing, have reduced greenhouse gas emissions by 26 percent.

Speaking on this occasion, Girault stated that the French Embassy in Rabat is committed to reducing its environmental impact, through the implementation of a green embassy approach, noting that this approach is not isolated, but concerns the entire French diplomatic network abroad.

For his part, the Minister of Spatial Planning, Urban Planning, Housing, and Urban Policy, Abdelahad Fassi Fihri, explained that the Green Embassy is an exemplary experience that makes a significant contribution to the fight against climate change.

Moreover, Fassi Fihri is calling for green initiatives to draw on this experience and generalize it at the level of national administrations.