Rabat- King Mohammed VI’s humanitarian aid transport dedicated to Gaza arrived at Cairo’s West Air Base Airport on Tuesday to be shipped by road to Gaza. 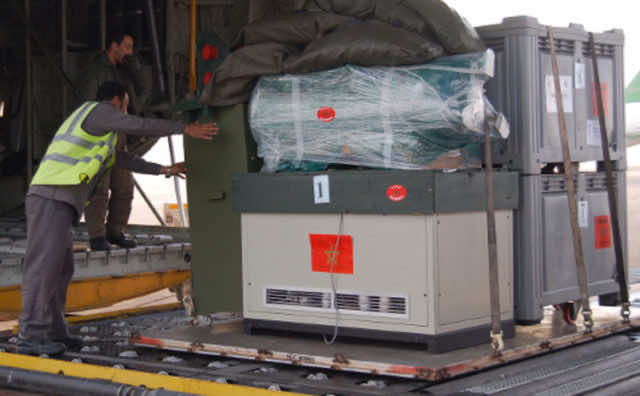 By
Ahlam Ben Saga
-
Ahlam Ben Saga is a Cultural Studies graduate from university Mohammed V of Literature and Humanities in Rabat.
Jun 7, 2018
Spread the love

Rabat- King Mohammed VI’s humanitarian aid transport dedicated to Gaza arrived at Cairo’s West Air Base Airport on Tuesday to be shipped by road to Gaza.

Four Moroccan military aircraft, loaded with 113 tons of aid, including 25 tons of medicine and 5,000 blankets, landed in the Egyptian capital. Food aid will be sent to Gaza as well as to Al-Quds (Jerusalem) and Ramallah through Jordan.

Morocco’s Ambassador to Egypt Ahmad Tazi received and supervised the transferring of the goods to land transports which will take them to the Gaza strip.

At the sovereign’s request, a Moroccan field hospital will be built to assist the people of Gaza who witnessed and suffered the massacre of May 14 that left thousands injured and dozens killed amid protests, on the same day of the US Embassy’s inauguration celebrations in Jerusalem.

The hospital is equipped to handle vascular surgery, abdominal surgery, pediatrics, traumatology, ENT, and ophthalmology. It has 97 staff, including 21 nurses and 13 doctors of the Royal Armed Forces (FAR) medical unit.

Recently, the Palestinian Grand Mufti of Al-Quds, Muhammad Ahmad Hussein expressed immense appreciation for the king’s initiative, describing it as a brotherly gesture that will “mend the Palestinian wounds.”

The Grand Mufti emphasized that Morocco has always stood by Palestine in hardships and that the sovereign’s act of solidarity is no surprise to Palestinians.

“The wound of Palestinians is bleeding. The [King’s] assistance came to mend the wounds of Palestinians and make them realize that they are not alone but have brothers in the far Maghreb region who want to extend a hand of help,” the Mufti expressed at the press house of Tangier, during his visit to Morocco to attend the King’s Ramadan lectures.