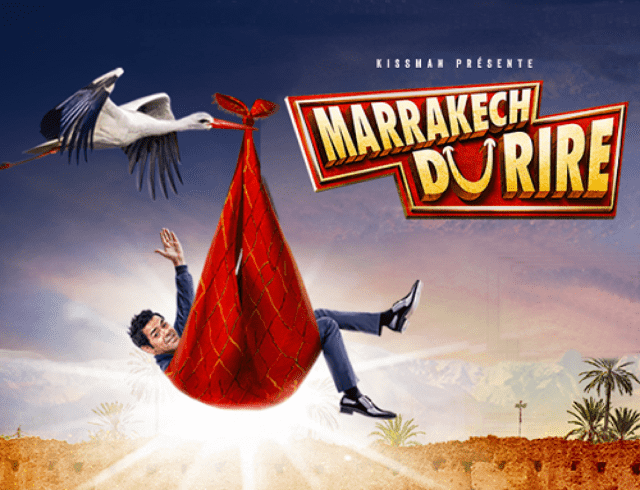 The 8th Annual International Humor Festival will kick off June 20 and run until June 24. With several well-known comedians participating in the event, laughter is guaranteed to fill the ochre city throughout the weekend.

The best of French and Arabic-speaking comedians will be reunited during these five days. On Wednesday, June 20, Eko and his friends will host the opening Grand Gala, with an Arabic-speaking evening that will bring together a host of comedians, singers, dancers, and actors on the stage of the Badii Palace, in the great secular tradition of the “halqa.”

On the same evening, D’jal will present his first new show after five years of selling out his previous show at the Royal Theater. With a brand new energetic show, D’jal’s return to the stage is highly anticipated.

On Thursday, the public will attend the second Gala Afrika  at the Palais Badii, which will feature French-speaking artists celebrating Cameroonian, Congolese, Senegalese, Gabonese and Ivorian humor, led by the sensational Mamane.

At the same time, festival-goers will see Abdelkader Sector at the Royal Theater in a new show at the crossroads of storytelling and a one-man-show.

Friday will be the high point of the festival, as the Gala “Jamel and his friends” will gather prestigious guests of the artistic world at the Palais Badii for a show that promises to be exceptional, broadcast worldwide and featuring Ahmed Sylla, Jeff Panacloc, Camille Lellouche or Malik Bentalha, alongside the festival’s creator Jamel Debbouze.

Festival-goers will also see the best-of by returning comedic illusionist Eric Antoine at the Royal Theatre.

Staying on the Jamaa El-Fna square, the public will live or relive in the Orange stage  the new hopes of Moroccan stand-up comedy with the sessions of Jamel Comedy Club Morocco 2018.

The comedy festival was founded by Jamel Debbouze in 2011. Each year, several French and Arabic-speaking comedians perform before large audiences in the city of Marrakech, attracting approximately 90,000 festival-goers annually and reaching 70 million viewers worldwide.

Tickets for Marrakech du Rire 2018 are still available in various online outlets, such as www.marrakechdurire.com, www.ticketshow.ma, and www.hmizate.ma. For the latecomers, a point of sale will be especially opened during the festival within the Royal Theater of Marrakech.