Rabat- King Mohammed VI will preside over the eighth religious lecture of Ramadan and the prayer vigil of Laylat Al Qadr (Night of Decree) on Monday night in Rabat Hassan mosque. 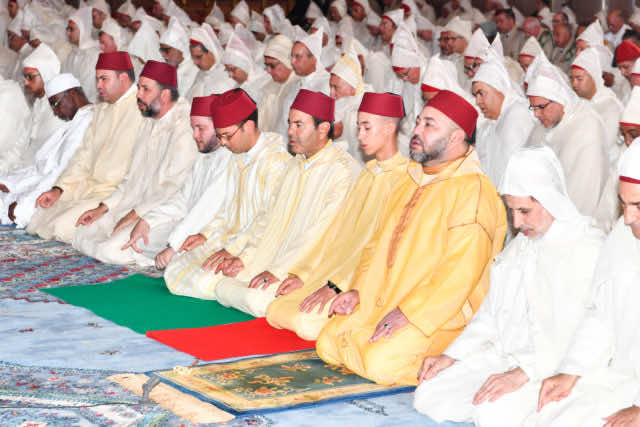 Rabat- King Mohammed VI will preside over the eighth religious lecture of Ramadan and the prayer vigil of Laylat Al Qadr (Night of Decree) on Monday night in Rabat Hassan mosque.

The Ministry of the Royal House, Protocol, and Chancellery announced that the sovereign will preside over the ‘Hassania’ religious lecture, given during Ramadan since the late King Hassan’s reign.

The President of the Local Council of Ulemas in Moulay Yacoub province near Fez, Hassan Azzouzi, will give the lecture, themed “Cooperation between the Kingdom of Morocco and African countries in the fight against extremist thinking and terrorism,” from the Qur’anic verse (5:2):

“And cooperate in righteousness and piety, but do not cooperate in sin and aggression. And fear Allah; indeed, Allah is severe in penalty.”

The lecture will air live on Moroccan television channels and radio stations, starting at 5:00 p.m.

Following the lecture, King Mohammed VI will attend the Taraweeh Ramadan prayers after isha (night-time prayer) at the same location, Hassan Mosque, in commemoration of the holiest night in the Islamic year, Laylat Al Qadr.

Laylat Al Qadr is rendered in English as “the night of decree” or “the night of destiny,” and is celebrated on the 27th night of Ramadan when the Qur’an was revealed to the Prophet Mohammed (peace be upon him).