Morocco World News
Home News Morocco Morocco Will Never Give Up on its Dream to Host World Cup:...

Rabat - “It is a bid for a whole people:” this was Morocco’s aim while bidding to host the 2026 World Cup. Morocco made its last attempt to try to convince football federations to vote for its bid, before disappointingly losing to United 2026. 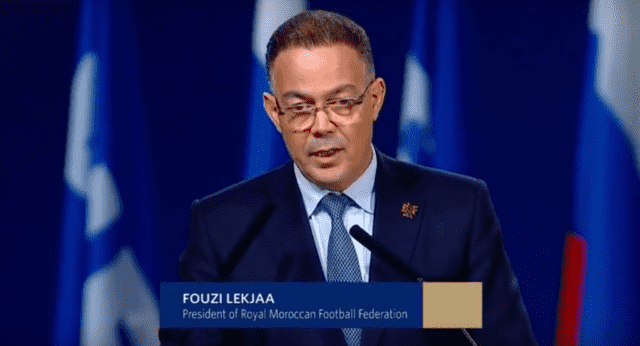 Rabat – “It is a bid for a whole people:” this was Morocco’s aim while bidding to host the 2026 World Cup. Morocco made its last attempt to try to convince football federations to vote for its bid, before disappointingly losing to United 2026.

Minutes before the vote, members of Morocco’s committee stepped on to the stage to present its bid briefly to the voting football federations.

Chairman of Morocco’s 2026 World Cup bid Moulay Hafid Elalamy said before the event, which convened hundreds of football representatives from all over the world, that “Morocco’s bid is not only for Morocco, but it is a bid for a whole people.”

Elalamy touted Morocco’s stability, which was recognized by international powers, as well as Morocco’s strict law against the use of weapons.

The chairman of the bid committee expressed his pride and Morocco’s satisfaction over leading a competitive campaign.

He said that Morocco’s bid demonstrated its capacity to host the tournament, which was validated by FIFA.

He mentioned Morocco’s strategic projects throughout the years, including the high-speed train, a solar power plan, and investments.

He also added that the country receives thousands of tourists, and Morocco would sell game tickets for reasonable prices.

President of the Moroccan Royal Football Federation (FRMF) then talked about the significance of Morocco’s values, its strategic position on the map, and Morocco’s passion for football to celebrate Africa.

According to Lekjaa, it is legitimate for Africa to host the tournament a second time to demonstrate Morocco’s assets and to develop football on the continent.

After the vote, which gave the hosting rights to United 2026 with a vote of 134 federations, the Moroccan committee congratulated the North American bid.

Morocco’s committee also expressed its determination to submit a bid again to host the tournament.

The chairman of the bid said Morocco’s bid “was committed, ethical and totally in keeping to the rules imposed by FIFA World Cup, which in 2026 for the first time will see the participation of 48 teams, meeting the new demanding specifications of FIFA.”

Lekjaa also voiced his satisfaction with the Moroccan bid, describing it as a “solid bid, where football is at the center of an authentic, profitable FIFA World Cup with a strong legacy.”

He also congratulated FIFA President Gianni Infantino for “all that has been done to make things move towards more transparency and inclusion and I want to reaffirm the commitment of my country to continue to work for football.”