Rabat - After host nation Russia’s delirious thrashing of an uninspiring Saudi side in yesterday’s opening game of the FIFA 2018 World Cup, Uruguay eked out a 1-0 win against Egypt on the second day of the tournament. 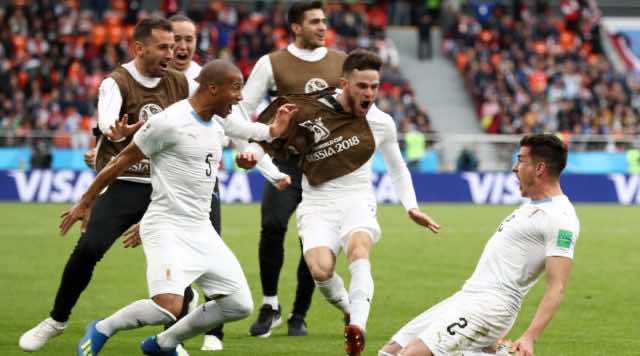 Rabat – After host nation Russia’s delirious thrashing of an uninspiring Saudi side in yesterday’s opening game of the FIFA 2018 World Cup, Uruguay eked out a 1-0 win against Egypt on the second day of the tournament.

Although the game lacked the fluidity of modern football, it featured some of the game’s best—take Cavani and Suarez, for example. It was clear that the quality was there, that both teams had sufficient arguments for a beautiful show. However, perhaps in a bid to minimize the damage that the other team could cause them, both teams performed a rather slow and languid first half.

For 45 minutes, one had the feeling that that this is what football is becoming: a game where teams sit back and wait to be provoked, not attacking until challenged.

Egypt, playing without its talisman Liverpool striker and aware of Uruguay’s slightly higher preparedness, was content with putting on an almost spotless defensive wall.

Waiting for something unlikely to take place can be agonizing, but it can also create suspense while waiting for the actual intensity.

The waiting did prove useful, for some tactical changes on both sides brought determination and pace in the second half. There was a perfect one-two moment between Uruguay’s Cavani and Suarez at the 46th minute, but Egypt’s substitute goalie El Shenawy thwarted Uruguay’s first truly attacking tempo.

The game then slowed down again.

When asked before the match whether Egypt had the same confidence with or without “Mo” Salah, Coach Hector Cuper said that his team had not come to just play the group stage and subsequently bid farewell to the World Cup. “We have not come to play three games and then say ‘thank you Russia’” the Argentinian tactician said.

Despite Salah’s absence, the Egyptians did have some good vibes, with Trezeguet trying to fill Salah’s shoes from time to time, and Fathi, who bore the armband in veteran goalie El Hadary’s absence, sending a fantastic shoot in the South American box at the 71st minute. But Fernando Muslera was there to stop Egyptian fans from getting ahead of themselves.

At minute 80, however, as if having received some kind of miraculously regenerative breath from the gods of football, the game dramatically changed. Both teams showed more composure, more willingness to take risks, more runs, and more crosses. Cavani’s 82 nd minute half-flying volley was the culmination of such regained inspiration. But the Paris boy’s beautiful volley found an equally excellent El Shenawy in the Egyptian box.

At that point Egypt started pushing less and less, counting instead on a morale-boosting draw before taking on Russia and Saudi in their next games. They could have had a draw; they deserved to have one after 90 minutes of solid teamwork.

But, again, the gods of the game can be ruthless. At minute 90, unmarked in the box on a free kick, Atletico Madrid’s José Gimenez smashed in a superb header for Uruguay. 1-0 for Uruguay just before stoppage time. Mo Salah’s facial expression said it all: having dropped three points in the first game makes their Russian adventure difficult to salvage.

As for Uruguay, the goal was an absolute deliverance, and its effects were palpable. “Overconfidence will be our greatest enemy,” Cavani said before the match when asked whether coming in the tournament as group favorites made any difference to the team’s spirit and playing philosophy.

Cavani had a point. Uruguay may not have crushed Egypt, as the North African Pharaohs were decently present in the game—defensively compact and tactically spotless. One-zero was not the expected outcome, but it was enough to hand Uruguay the needed points to ensure a good start to their tournament.