Rabat - A court in Finland sentenced Moroccan asylum seeker Abderrahman Bouanane, who stabbed two people to death in Turku, Finland in August 2017, to life in prison.

Rabat – A court in Finland sentenced Moroccan asylum seeker Abderrahman Bouanane, who stabbed two people to death in Turku, Finland in August 2017, to life in prison.

French news agency AFP reported that the man was sentenced for terror-related murders and eight attempted murders by the southern Finland district court.

Before the court decision, Finnish authorities described the stabbing attack as a “terrorist act.”

After his arrest, the 23-year-old suspect denied having a terrorist motive and intentions to commit murder.

Finnish media reported in August that the suspect claimed responsibility for the attack.

According to Finland’s National Bureau of Investigation (NBI), the suspect had given “false information” to the Finnish authorities when he arrived in Finland and requested asylum.

Six other people have been arrested on suspicions of being involved in the attack. Three of them have since been released.

The attack happened just a day after the terror attacks in Barcelona, where 14 people were killed and at least 100 people were injured. 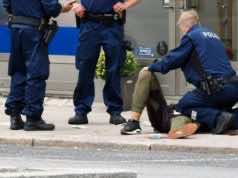