Rabat - The recent failed treasure-hunting attempt in Serghina, 135 South East of Fez, is an example of Morocco’s infantile thought.

Rabat – The recent failed treasure-hunting attempt in Serghina, 135 South East of Fez, is an example of Morocco’s infantile thought.

Infantile thought makes the person admire myths because it feeds his imagination and allows him, according to psychoanalysis, to relieve his daily frustrations so that he always takes the role of a legendary hero.

As he grows, the child gradually recognizes reality and realizes that all myths were a mere metaphor.

In the beginning, the child believes the storyteller and considers him one of the mythical characters and that he is right. But when he grows up, he realizes that the storyteller is only telling stories, and their relationship becomes mature and rational.

Believing in the personalities of jinn, angels, demons, the “zouhri” (children who find treasure), and magic and miracles as concrete and true facts attests to the infantile thought of Moroccans and Arabs.

They do not differentiate between myths, metaphors, and reality, and they still believe storytellers. This is due to several reasons:

Believing in metaphysical metaphors through religion

When ancient religions emerged, man was illiterate and ignorant, and religion came to educate him and turn him into a mature man.

Humanity was then at an infantile level, and hence religious texts identified several concepts in a material form, such as jinn, Satan, hell, paradise, and angels. In our time we should have realized that all these concepts were only metaphors!

For example, the devil is only the animal aspect of the human form and angels are only the spiritual aspect, which should be developed by getting closer to God through religion. Paradise indicates only the degree of the soul’s growth as it approaches God, and hell indicates the soul’s distance from God.

When religions emerged, it was not possible for humanity at an infantile level to recognize these metaphysical facts, and they had to be identified in a material form.

Unfortunately, the spokesmen of religion still speak and narrate fictional things meticulously, making the Arabs believe in imagination in a magical way, especially as these stories are almost inspired by religious texts. Thus, imagination becomes an absolute reality. This is what makes Moroccans believe everything that is imaginary and magical.

All religions recount a number of miracles, but these miracles were credible in their time and among the people who witnessed them. How could we believe what we did not see?

But since miracles have a religious character, then they may become true. This is why the Moroccan believes everything that is imaginary and mysterious and thus believes in the zouhri hand, the hidden treasure, the extraordinary ability of Qur’an memorizers, exorcists, magic, sorcery, jinn possession, and the powers of incense.

The storyteller and “Lafqih” (religious preacher)

In any religious gathering, the talk of the preacher is full of fairy tales that dazzle the audience. We know that magical and fictional stories feed imagination and deactivate critical thought.

Thus, there is no difference between the storyteller that tells magic tales and the preacher who also tells fictional stories of miracles, magic, demons, angels, jinn, paradise, and hell, and is believed by the mature audience with infantile thought as long as the stories have a religious character.

Serghina’s treasure and its relationship with religious myths

All of the above proves that Moroccan thought is still infantile and can believe all religious superstitions. Since the Moroccans concretely believe in miracles and believe that the word of God is capable of transforming earth into gold, the storyteller (impostor) finds the conditions conducive for them to believe in his miracles especially when he uses sacred texts.

If religion developed, the specialists of all sciences reviewed religious texts, and the religious discourse became a discourse that agreed with science and disposed of all myths, we would not unfortunately see hundreds of Moroccans in Serghina searching for hidden treasure!

If education was compulsory with the indoctrination of critical thought, exorcists and sorcerers would disappear and we would see Morocco progress towards a mature and educated human civilization! 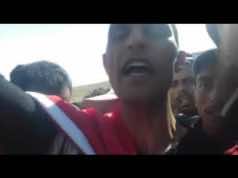