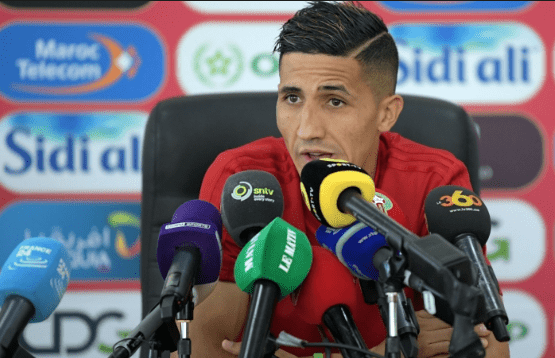 During a press conference held in Moscow yesterday, Fajr promised to bring the smile back to Moroccan football fans. “We know it will be difficult, but we will do everything to make a good result,” he said.

Fajr expressed confidence, emphasizing that he played for “3 or 4 years against Cristiano.”

“He is a phenomenal player but we can annoy him…. how? by defending well!” Fajr told reporters.

“I am not going to talk about all Portuguese players. We also have good players and we will do everything to upset them! Achraf Hakimi knows Cristiano well, he will tell us about him,” he added.

Fajr did not play in Morocco’s first 2018 World Cup game against Iran. Morocco lost to Iran 1-0 due to an own goal scored by Aziz Bouhaddouz during the extra time of the second half on Friday.

Commenting on the game against Iran, Fajr said  “we have started the game well, but we did not seize the opportunities.”

When asked about Morocco’s chances to qualify for the next phase, Fajr said that “We believe it anyway! If I tell you that I do not believe it, what are you going to say? We are not dead, we only want to go back in this game!”

He added that “We are a country that lives for football,” emphasizing that the team wants to bring happiness back to football fans.

“We know it will be difficult, but we will do everything to make a good result!” he added.

Group B, which is referred to as the deadliest group in the 2018 World Cup, opened up their games on Friday. The first game was played between Iran and Morocco, while the second game was between Spain and Portugal.

The Spanish and Portuguese teams delivered a magnificent spectacle, finishing with a 3-3 tie. Cristiano Ronaldo scored a hat-trick for his team during the game.

Morocco will play against Portugal on June 20, while the third game will be against Spain on June 25.