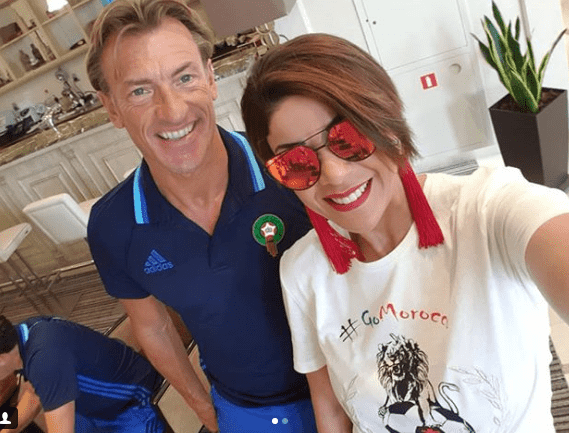 Since her participation in the song “Malhama”, considered by Moroccans as “a failed music tribute to support the Atlas Lions for the World Cup,” Hadioui has been criticized by Moroccan fans for “seeking attention” and wanting to always be in the spotlight. This time is no exception.

“All behind the Atlas Lions,” wrote the designer, model, actress, and singer on her Instagram page, sharing her picture with Renard. Quickly, the picture—liked over 53,000 times—went viral on social media and provoked thousands of negative comments.

“Stay away from football,” “After being in our screens the whole month of Ramadan you also want to play for the Atlas Lions,” “ Leila Hadioui wants to take Hervé Renard’s place,” “Acting, modeling, singing and designing was not enough for you?” and “Because of you we are going to lose,” commented people on her picture.

In her career, the Moroccan model and fashion icon has always wanted to try new things. From modelling, hosting, and acting to designing, Hadioui is one of the most-followed Moroccan celebrities on social media, with 2.2 million followers.

Hadioui, 34, responded to the backlash with humor, sharing in her Instagram story a widely-circulated meme of her trying to steal Hervé Renard’s job.

Hadioui was born in Casablanca, Morocco, on January 16, 1985 and is the mother of a young girl. She is one of the most prominent models in Morocco and her kaftan shows have earned her the experience to work with nearly all fashion designers in the country.

She has also participated in films, television series, soap operas, and sitcoms, and has hosted variety shows. The 34-year-old model is also the face of Diamantine and Flormar. She recently unveiled her own clothing line, called “Leila Hadioui.”

Leila Hadioui is not the only Moroccan celebrity who was criticized for supporting the Atlas Lions. French-Moroccan rapper La Fouine has also faced the anger of social media users for “bringing bad luck” to the national team by wearing the Moroccan jersey. They have blamed him for Morocco’s defeat against Iran.

It must be said that this is the third time the rapper has published a picture with the jersey of a sports team that loses.