Rabat - The Quebec government will soon open a representative office in Rabat, Morocco, by virtue of an agreement signed in Rabat on Friday, 22 June 22. 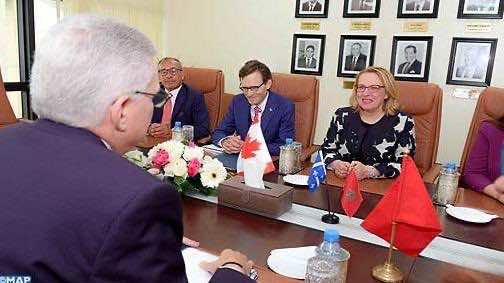 By
Tarek Bazza
-
Tarek Bazza is a journalist at Morocco World News with Master’s degree in Translation from King Fahd School of Translation in Tangier.
Jun 23, 2018
Spread the love

Rabat – The Quebec government will soon open a representative office in Rabat, Morocco, by virtue of an agreement signed in Rabat on Friday, 22 June 22.

Mohammed Ali Lazreq, Secretary-General of the Ministry of Foreign Affairs and International Cooperation, and Christine St-Pierre, Canadian Minister of International Relations and La Francophonie, signed an agreement between the government of Québec and the government of Morocco concerning the establishment of the Quebec representation office in Rabat.

The Ministry of International Relations and La Francophonie issued a communiqué last Friday saying that the opening of this new representation office is “proof of Quebec’s desire to strengthen its bilateral, economic and cooperation relations with Morocco.”

Mrs. St-Pierre confirmed that relying on immigrant labor and skills in Quebec remains a necessity for maintaining economic growth, as well as for increasing the competitiveness of businesses. “We are fortunate to have a large community of Moroccans in Quebec. More than 100,000 Moroccan people contribute daily to the advancement of Quebec society.”

At the signing ceremony, Ali Lazreq said that this office will contribute to strengthening the relations of cooperation, esteem and respect, which unite the two peoples, thanks to the values of tolerance, openness, and democracy they share.

“The convergence of our views on international issues, especially when it comes to issues of peacekeeping and disarmament, tripartite cooperation and the dialogue of cultures and civilizations, are just some of the expressions of our shared will to reinforce and enhance this cooperation, “he added.

Mrs. St-Pierre has also met Mohamed Yatim, Minister of Labor and Occupational Integration, last Friday. The focus of their talk was primarily on human resources and talent mobility. She welcomed the very deep relations between the two areas, expressing her wish to strengthen them further by establishing new partnerships in the fields of economy, culture, and vocational training.

For his part, Yatim emphasized his department’s commitment to work towards consolidating further gains, through specific trainings, which take into account the needs of the Quebec labor market, to properly qualify young people and allow them to have better professional integration.

In this regard, Head of Government Saâd Eddine El Othmani held talks with Mrs. Christine St-Pierre last Friday on means to promote bilateral relations. The head of government praised the excellent relations of friendship and fruitful cooperation between the two countries, given the common human and cultural ties.

Morocco is considered to be an important partner for Québec because of the long-standing bilateral, cooperative, and immigration relations that unite them. Morocco features regularly in the list of the five countries that send the most immigrants to Québec.