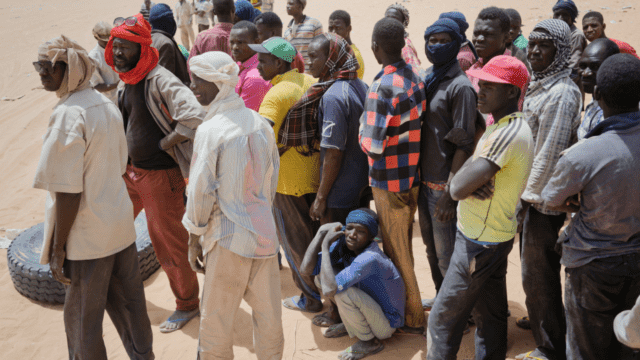 Rabat- Morocco’s neighboring country Algeria, according to an AP report, has abandoned 13,000 migrants in the Sahara without any food, water, or supplies over a 14-month period.

Algeria has indiscriminately packed men, women (including pregnant women), and children by the hundreds into densely crowded trucks, and dropped them off at “Point Zero,” approximately 15 kilometers from the Nigerien border.

After “Point Zero,” migrants are forced to trek out of Algeria, sometimes at gunpoint, into the blistering Sahara heat, which can reach temperatures of up to 48 degrees Celsius.

The vast majority of the migrants attempt to cross the 15-kilometer no-man’s-land to the border village of Assamaka in Niger. An unknown number have perished along the way; some collapse into the sand and are left; many wind up lost in the desert and are never seen again.

Alhoussan Adouwal, an official for the International Organization of Migration (IOM) in Assamaka, said “They come by the thousands, I’ve never seen anything like it.”

Many, once they pass through Assamaka, make their way on buses to Arlit, six hours to the south. From Arlit, they are transported to Agadez, where they board IOM-sponsored flights back to their home countries.

Horror in the desert

A Liberian migrant named Janet Kamara described the horrific scene. “Women were lying dead, men…other people get missing in the desert because they didn’t know the way.”

Janet herself was pregnant when she was left at Point Zero, and lost her baby due to the merciless journey. Another pregnant woman with her went into labor and sadly lost her baby as well.

Another Liberian migrant, Ju Dennis, who captured video evidence of Algeria’s abuses said if “you’re facing deportation in Algeria, there is no mercy.”

Algeria has continuously denied that human rights violations have been committed against migrants.

European Union pressure has led Algeria to increase the expulsions of migrants attempting to reach the Mediterranean, claiming that as long as the deportations follow international law, Algeria as a sovereign nation has the right to do so.

Algeria provides no statistics on the expulsions. However since IOM began keeping track in May 2017, a total of 11,276 have survived the crossing into Niger. Additionally 2,500 were forced into Mali, and an unknown number have died there.

IOM estimates that for every migrant killed attempting to cross the Mediterranean to Europe, two are killed in the Sahara. Since 2014, possibly over 30,000 have been killed in the desert.