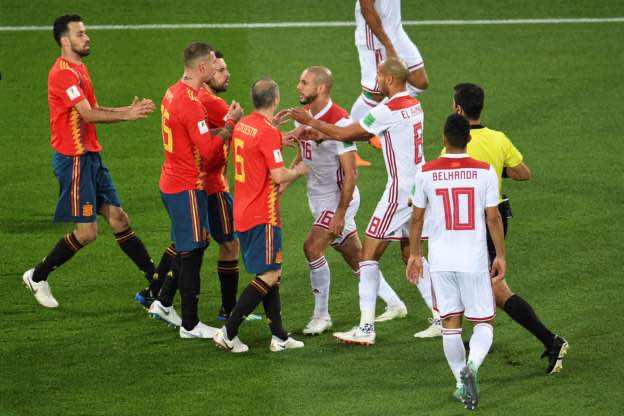 As a football fan, I have never seen this injustice inflicted on a single team in two consecutive matches in the highest football competition. Neither did I see a referee and his assistants allow a team to play a corner kick from a different side than the one where it should be played.

What happened to Morocco is beyond scandalous. Rather than using VAR to invalidate the whole action leading to the goal, since the corner was not kicked from the right spot, the referees chose to simply overlook that, but looked to whether or not the Spanish player was offside.

There is unanimity among football experts that Morocco played one of the best matches in this World Cup, whether against Portugal or Spain, not to mention Iran. Without FIFA’s selective use of VAR, Morocco would have qualified to the second round.

I watched the whole World Cup on the Spanish language channel Telemundo, and since the start of the tournament, all its commentators and experts were unanimous in lauding Morocco’s style of play, the players’ talents and devotion, and their generous efforts to honor their country in the World Cup.

As I was watching yesterday’s match against Spain, the two speakers who were commentating the game clearly said that the referee was distributing uncalled for yellow cards to the Moroccan players. They also expressed disapproval of the many fouls that were not given to Morocco.

In the past, Moroccans grew accustomed to being wronged by sub-Saharan African referees. For so many years, Moroccan fans were deprived of seeing their team achieve great performances at the continental level because of poor refereeing.

But as African refereeing has made great strides in recent years, Morocco finds itself now facing the deliberate intentions of FIFA to eliminate them from this World Cup.

Great game for Morocco against Spain ??
Thank you for this spectacular show,
Shame on you FIFA for being racist against Morocco vs Portugal game and for not using VAR technology. #fifaworldcup #moroccovsspain #russia2018 #shameonyoufifa #varforeveryone #varisbullshit pic.twitter.com/18rT9FGhZv

It is undeniable that Morocco did not play only against three teams of its group, but also against FIFA and its referees.

The world was a witness of the injustice that American referee Mark Geiger inflicted on Morocco during its match against Portugal on June 22. Experts throughout the world were unanimous in expressing their disappointment with the selective use of VAR during Morocco matches against Portugal and Spain.

Football legends such as Italian striker Christian Vieri, former French defender Marcel Desailly, French coaches Luis Fernandez and Arsene Wenger said in unison that the American referee—who was once involved in match-fixing accusations—did a lot of harm to Morocco.

The same story happened in yesterday’s match against Spain. Since the beginning of the match, it appeared that the referee had one goal in mind: to qualify Spain to the second round, even if this meant giving Moroccan players as many yellow cards as possible and eventually red cards.

In the post-match discussion, former Egyptian striker Mohamed Aboutrika wondered whether there was a deliberate intention from FIFA to eliminate Morocco from the World Cup.

As I said in a previous article, given the entirety of circumstances that surrounded Morocco’s match against Portugal and Spain, there is every reason to think that FIFA President, Gianni Infantino, was intent on harming Morocco and making it pay for the media campaign Morocco launched to pressure FIFA and deter it from disqualifying the Moroccan bid to host the 2026 World Cup prior to vote day.

It was no secret that Infantino, who owes his post as head of the world’s football body to the Americans, wanted to return the favor by allowing the United 2026 North American bid to win the rights to host the 2026 World Cup. However, FIFA’s schemes and its attempt to eliminate Morocco through the Task Force it created for that purpose fell through.

This is perhaps the reason why FIFA’s president wanted to retaliate against Morocco.

That Spain’s equalizer was allowed at the 93rd minute right after Iran leveled the score in its match against Portugal raises suspicions about the clear intent of FIFA and its referees to avoid Spain’s elimination from the first round of the World Cup.

In the event Morocco held its advantage against Spain and Iran scored a second goal against Portugal, Spain would have been left out of the competition, allowing Iran to qualify for the next round of the World Cup.

Such a scenario would have been catastrophic for FIFA, whose economic model is built on ratings. The higher the ratings, the higher the profits.

A World Cup in which one of the favorites is eliminated from the first round would lose its appeal for FIFA’s big sponsors, mainly television channels who pay hundreds of millions of dollars to buy the rights to broadcast the World Cup.

The lesson learned from this World Cup is that FIFA is one of the most corrupt organizations around the world. It is there to help powerful nations and so-called big football nations to keep their monopoly over this sport.

This World Cup will go down in history as one of the most scandalous tournaments.

Not only was FIFA aware 18 months ago of the Russian ministry’s schemes to cover the doping cases, but it had not done anything so far to sanction the unsportsmanlike practices of the Russians.

Rather FIFA chose instead to hit at underdogs, such as Morocco, urging it to explain why its player Nordin Amrabat was allowed to play against Portugal, five days after his head injury against Iran.

In light of the injustice inflicted on Morocco in its matches against Portugal and Spain and the brazen and disgraceful favoring of the “good” teams, the Royal Moroccan Football Federation should work hand in hand with the Confederation of African Football (CAF) to submit a formal protest to FIFA.

The ignominious refereeing mistakes made against Morocco are unprecedented and should push all African federations to mobilize and call on FIFA to apply the rules equally to all its members regardless of their track record or the fame of their players.

As long as teams participating in the World Cup do not play on a level playing field, football will no longer be the sports of the masses, but the realm of the powerful and the well-to-do, and African countries will never be allowed to go beyond the stages that are considered as acceptable to profit-driven and biased people who pull the strings within FIFA.

CAF is composed of 55 members, and it should use this card to convey to the FIFA president that he risks losing the support of African confederations in his reelection scheduled in June 2019 if FIFA does not explain why Morocco was the victim of unfair and disgraceful refereeing during this World Cup.