Rabat- The Atlas Lions delivered an unforgettable final match against Spain Monday evening, and Moroccans could not be more proud of their national team’s performance. 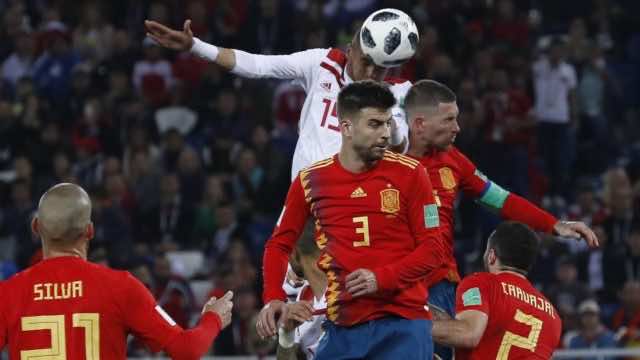 By
Ahlam Ben Saga
-
Ahlam Ben Saga is a Cultural Studies graduate from university Mohammed V of Literature and Humanities in Rabat.
Jun 26, 2018
Spread the love

Rabat- The Atlas Lions delivered an unforgettable final match against Spain Monday evening, and Moroccans could not be more proud of their national team’s performance.

Although the Atlas Lions were eliminated from the 2018 World Cup tournament, their last game against Spain did not disappoint, and many wished to see more of the team in the tournament.

Throughout the match and after it had ended, social media users expressed their pride in the Lions: “So proud of you guys. Thank you for 3 amazing matches with 2 of the most powerful teams.” one Twitter user said.

So proud of you guys ??? Thank you for 3 amazing matches with 2 of the most powerful teams. You showed the world how football is really played ??#ESPMAR #??????_??????? pic.twitter.com/rBcAacAUuW

Many Moroccans also expressed anger over FIFA’s failure to use the video assistant referee (VAR) in Morocco’s favor in the two games against Portugal and Spain. Hashtags like #shame_on_you_fifa and #var_is_bull[****], quoting Nordin Amrabat, emerged to denounce FIFA’s controversial VAR use.

Fifa screwed Sweden vs Germany for not giving a clear penalty in favor of Sweden. Same thing happened when Morocco played Portugal. More “missed penalties.” And now Spain vs Morocco. Biased refs, it’s very obvious that politics/corruption are running and ruining the sport.

“Same scenario is repeated, justice doesn’t have any role in the world cup!
Anyways we showed our capacity besides everything,” one tweet reads.

Same scenario is repeated, justice doesn’t have any role in the world cup!
Anyways we showed our capacity besides everything ??? proud of our strong team! ?????#???????_?????? #MoroccoVsSpain #Marocco pic.twitter.com/na9SvFlfX3

If you watch yesterday’s game Morocco ?? vs Spain ?? that was totally unfair.

I can’t believe that #??????_???????@FIFAWorldCup why this racism with Moroccan team ?all matches are the same pic.twitter.com/BQ5LFZbfw1

This #World cup video review is total #Bullshit. #Morocco has just been robbed.

Morocco has given Spain a fright:

The Atlas Lions were fantastic in their unpredictability. The Spanish team knew it well.

Spain’s coach, Fernando Hierro, acknowledged the Atlas Lions’ strength and said before the match on Monday that Morocco world be a “tough rival.”

Playing to save their pride and knowing that they were already out of the World Cup due to two consecutive 0-1 losses, the Atlas Lions were unstoppable in the game against Spain. They took on the team and led the match  1-0 14 minutes into the game, making Spain worry, only for the European giant to finish the game with a 2-2 equaliser.

MOROCCO TAKE THE LEAD OVER SPAIN!

Iniesta and Ramos lose the ball in midfield and Boutaib takes advantage. pic.twitter.com/s1GpylxGI5