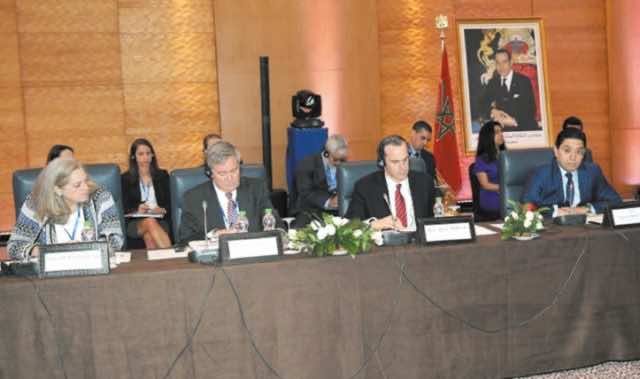 The coalition previously met in Kuwait in February this year; in Morocco they seek to reaffirm their commitments against the terrorist group.

The meeting’s program focused on eradicating the extremist group in Iraq and Syria, countering its global networks, halting its financing, providing a counter message, and curbing recruitment.

“Within the framework of the evolution of the strategy of Daesh [ISIS], Africa is among the most targeted zones,” said Bourita, calling for cooperation amongst African states and the global coalition.

Bourita noted that, excluding Iraq, Syria, and Afghanistan, Africa suffers the greatest number of militant attacks and that the continent has a lot to learn from the global coalition’s efforts against ISIS.

McGurk said, “We are particularly grateful to Morocco’s leadership and its contributions” and that Morocco had achieved “much progress in its efforts to erase the terrorist organization and thwart its influence in many parts of the world, including Africa.”

Morocco through the years has cracked down strongly on terrorist cells recruiting and planning attacks in the kingdom and abroad.

McGurk noted that there were 52 delegations, including 24 from Africa, in attendance at the meeting in Skhirat near Rabat. With the addition of the Republic of Guinea and CEN-SAD (the community of the Sahel-Saharan States), coalition membership has increased to 77 countries. The presidential envoy also announced that the coalition will spend USD 90 million on the stabilization of Raqqa.

The meeting comes in the aftermath of ISIS losing swaths of territory recently since their rapid offensive that swept across Syria and Iraq in 2014. With ISIS losing ground in Iraq and Syria, the coalition can further concentrate on rooting out the extremist militant group from the other branches of its global network, of which Africa is a major region.