Rabat - Reporters Without Borders (RSF) has asked for the release of the six journalists, Mohammed al-Asrihi, Rabiaa al-Ablak, Abdelali Houd, Houssein el Idrissi, Fouad Essaidi, and Jawad al Sabiry, who were sentenced for covering the Hirak protest movement in the Rif, between 2016 and 2017. 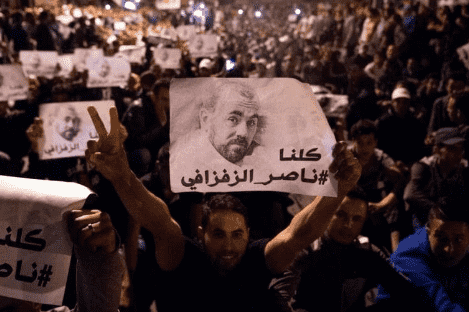 Rabat – Reporters Without Borders (RSF) has asked for the release of the six journalists, Mohammed al-Asrihi, Rabiaa al-Ablak, Abdelali Houd, Houssein el Idrissi, Fouad Essaidi, and Jawad al Sabiry, who were sentenced for covering the Hirak protest movement in the Rif, between 2016 and 2017.

“Reporters Without Borders condemns these harsh prison sentences against citizen journalists who have only exercised their right to report on a social movement that has rocked their country,” said Souhaieb Khayati, director of RSF’s North Africa office. “We demand their immediate release.”

Yesterday, the same court of appeal had decided to judge the case of journalist Hamid el Mahdaoui, editor of the website Badil.info, separately from his 54 co-defendants, who were sentenced Tuesday. Mahdaoui was prosecuted for “non-denunciation of a crime affecting the internal security of the State.” The court should decide on his fate today at a separate hearing.

The court gave sentences ranging from 1 to 20 years in prison for the activists, some of whom were arrested nearly a year ago. Four leaders of the protest movement, including Nasser Zefzafi and Nabil Ahemjik, received 20 years in prison.

Following the decision of the court, anger and condemnation have erupted nationwide from journalists, celebrities, and human rights activists on social media as the Casablanca Court of Appeal pronounced heavy sentences Tuesday night for the Hirak Rif activists.

In the view of activists, the sentences were unfair for the young protesters, who fought for social equality and denounced the lack of human rights in the Al Hoceima region. The digital society has called the sentences a “dramatic error.”

Two protests were staged yesterday evening, in Rabat and Casablanca. Additionally, students in the northern city of Nador protested during the day Wednesday.

Protesters, from the youngest to the oldest, chanted anti-government slogans in front of Rabat’s Parliament and in Casablanca’s Place des Nations Unies.

Demonstrators held banners or chanted slogans saying “We are all Zefzafi” and “The people want freedom for the activists,” “Freedom, dignity, justice for society,” “Long live the Rif,”  “This country is corrupt,” and “Mourning.”

The Hirak protests began after the death of the local fishmonger, Mouhcine Fikri, who was crushed to death in a garbage truck in October 2016 while attempting to retrieve his goods that authorities had confiscated.

The death of Fikri angered Moroccan citizens, especially people in the Al Hoceima province, who condemned the situation and the social disparities in the region.

Throughout the protests, law enforcement arrested more than 400 Hirak activists for their participation in “unauthorized demonstrations,” on charges of “undermining the internal security of the state.”